PCC-ML: The Contradiction Between Socialism and Capitalism 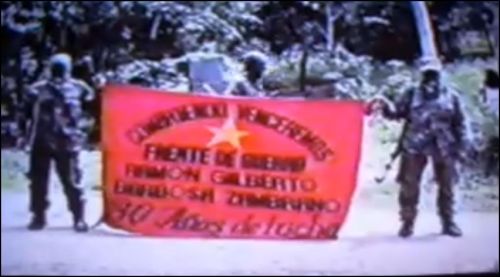 Lenin in his day unraveled the existence of four fundamental contradictions, full force:

On this occasion we will refer only to the contradiction between socialism and capitalism.

The basic principles of the theory of the proletariat are not supra-historical. During a long historical period in which the proletariat is positioned as the most revolutionary class, also its ideology and theory are the most advanced and uniquely able to guide and ensure the great changes of society in all fields, required for building the new society, socialist society and communism.

Just as the capitalist society is governed by its principles and has its laws of development of socialist society also has its own laws and principles, from which can solve the serious contradictions of capitalist society that hinder social development and unleash the factors that determine the unstoppable progress of humanity. Socialism requires the scientific and technical development as a condition for their own advancement, but its design and purpose are totally opposed to capitalism. In socialist society, progress is an ultimate goal: the benefit of humanity, not, in essence, that of capitalism, which is profit.

Today we pay special attention to the development of historical materialism as the basis of our political theory, and intensify the struggle against bourgeois currents of thought which are grouped under the name of modernism and post-modernism and against revisionism and social democracy, and against the thesis of the so-called neo-Marxist.

Have caused much damage to Marxism-Leninism, all the distortions in his name and that of socialism has been dumped. The abandonment of the principles and the review of them have contributed a large share of confusion and demobilization.

Doctrinal simplifications also bring many problems. Those “enlightened” by their idealistic, decreed the death of ideology and of Marxism-Leninism can not hide the misery of his “masterpiece” in capitalist society and putrefaction, with no chance of lasting recovery. Who is convicted of the life and history is certain death to the bourgeois world. In order to precipitate and armed with Marxist-Leninist doctrine, constantly fighting alongside the proletariat and peoples, to be inevitable and final burial.

The so-called crisis of the “isms” is nothing more than garbage to combat imperialist and bourgeois to proletarian ideology, theory and, in particular, to deny the importance of the revolutionary party of the working class and its role in the revolution.

We condemn that, under difficulties it has experienced the international communist movement and revolutionary processes specific to echo the so-called “collapse of principles” to fall into nihilism in defeatist, involving a decadent bourgeois thought, or to find the road of revisionism and social democracy, or embrace the thesis of modernism and postmodernism, which despite being presented as the “latest developments” bourgeois philosophy, expressed a reaffirmation of its idealistic and metaphysical sterile, incapable of offering anything new to the humanity, as culture is not light.

Marxism-Leninism, proletarian science, today is the only one able to interpret in an objective, creative and transforming the world. We know the challenge of the world proletariat to move forward in the development of the subjective conditions for revolutionary change. But this challenge has now a more favorable ground: in contrast to the promising outlook of the proletariat, imperialism and the bourgeoisie are living a crisis of death, in historical terms, are in decline. That does not mean that they have exhausted their ability to maneuver or that his fall is easy. We are the communists and revolutionaries, workers and people responsible for deal a mortal blow, and that requires us to move forward in developing our potential ideological, political, organizational and military. Imperialism will not sink alone, must be defeated and crushed.

We affirm the contradiction between socialism and capitalism, regardless of the existence of a socialist camp, or a country which does justice to this system.

For various reasons we can not talk now of a socialist camp. That is why we refer to the ideological and political support that led to that characterization. This contradiction continues to exist in the world and its deepest base lies in what these two systems mean as radically different conceptions and practices in all aspects of life. It has been demonstrated by the processes propose the construction of socialism in democratic and anti-imperialist revolutions aimed at socialism and the forces fighting for the revolution and provided with a path toward socialism.

In the world there are battles that are struggling to destroy the capitalist system and imperialism and therefore still alive the ideals of the proletariat, whose theory and its direction can enlighten and encourage the media to find the way towards socialism after historical experiences. Socialism has existed in the world and has proved its superiority over capitalism in all fields, so it remains the beacon for the working class and popular struggle for socialism and the transition to communism, which is the highest goal of humanity .

The correlation of forces between the poles of this contradiction has been changing. The October Revolution opened the era of proletarian revolution starting the construction of socialism that Lenin and then Stalin, led to great heights of development. Recognize their enormous contributions to the cause of the proletariat and its brilliant performance in the realization of this system and in defense of the principles handed down by Marx and Engels.

If we look at history without immediate, we must recognize that socialism is still young, who had a short existence. Compared with capitalism, since the industrial revolution and the French youth of socialism is undeniable.

We must deepen the study of the factors are as essential to socialism, its basic principles, as distinct from corresponding measures for individual countries, periods or cases that are not necessarily general for prosecution. The central issue of the revolutionary process is the conquest of power as a means of building the new society, with the working class in control, with the Communist Party leadership, the establishment of popular power, which is expressed in a way the dictatorship of the proletariat. A society that would eliminate private ownership of the means of production, to ensure the welfare and solving the problems of the masses. It is the destruction of the bourgeois state and the establishment of a new, state of the dictatorship of the proletariat, so strong that is capable of completely destroying the remnants of the bourgeoisie and private ownership of the means of production, and to progress toward their own extinction, characteristic of a communist society. This evolution of socialism, is a long and difficult process, said Lenin.

The proletarian state is the lever of the working class and its allies to finalize the bourgeois democratic tasks that can not perform and transform it into a proletarian democracy, for the expropriation of the exploiters, suppressing the oppressors, to develop the productive forces, establish socialist relations production and take the road of building socialism, without interruption.

Efficiency in economic performance, to ensure the welfare of people in the middle of the highest quality and speed, and with the use of the technique developed in the system of economic rationality, ie the role of the Scientific Technical Revolution “RTC” in socialism becomes especially important. Central planning and the necessary harmonization among all economic sectors and regions, and its development and growth to say the socialist nature of the economy, service workers, are issues that require strict monitoring and control of the working class and party.

It should take into account the varying degrees of development have different societies, both during the struggle for carrying forward the revolution, as in the moment of triumph. Such uneven development imposes on the specific characteristics of socialist construction. Do not forget that until now successful revolutions and socialist construction process in general, have been delayed or dependent countries, perhaps with the exception of the former East Germany, while important revolutionary attempts in developed capitalist countries have been defeated . This is a phenomenon that catches the attention of the Marxist-Leninist, in which we engage the necessary efforts to unravel its causes, then, their significance for the present and the future of the process of world proletarian revolution is huge. Surely this will lead us to punt situations sufficiently clear of the current general international political developments and the progress of the development of revolutionary processes in these countries, in particular.

For the above and other reasons, we consider necessary to study the various processes of transition from capitalism to a socialist society, which behave while its own particularities, must abide by some basic principles that define the type of society that builds on the success of revolution.

The characteristics of the ownership of the means of production in socialist society pose a crucial break with capitalism. From its nature, the socialist relations of production are developed and there are other laws governing the new society.

The economic and social order must be directed to “ensure the maximum satisfaction of material and cultural needs, steadily rising, the whole society through continuous development and improvement of socialist production on the basis of higher technical “. This requires central planning, establishing priorities and measures and controls the production and delivery, and begin to bring to heel the law of value.

The correlation of forces within each country and at the level of external factors must be evaluated constantly to see where progress can be made in the implementation of socialist measures in each period. It is not slow the momentum processor, but avoid voluntarism, which can lead to missteps. Delicious teachings of this has given us the process of socialist construction in the USSR under Lenin and Stalin at the helm, and other countries. Remember the changes that had to be introduced at different times in relation to policy towards the rural poor, middle and rich, and changes in the period of the NEP (New Economic Policy).

The failures in the countries of Eastern Europe are not derived from the fundamental laws of socialist society. Neither witness the wreck of a system or fundamental thesis about the construction of the new society.

Applications have failed deformed basic economic laws and policies or their application is not complete, historical errors have been made, lack of development on the theory of building socialism.

At the ideological level it must meet on an ongoing basis all expressions of conceptions enemy, the step that aims for comprehensive training, development of science, culture, technology and production on proletarian base.

However, despite the feverish work of destruction and smear campaigns of imperialism and the bourgeoisie, socialism fully retains its validity.

XII International Seminar on Problems of the Revolution in Latin America