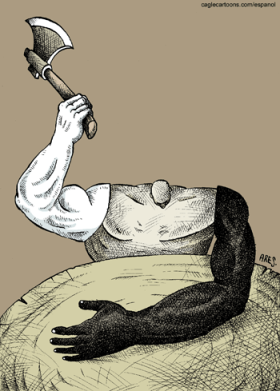 The following are a series of revealing articles on the connection between the CIA-backed Nicaraguan Contras and the smuggling of illegal drugs, particularly cocaine. They are among the first exposés about Contra drug smuggling published in the United States. They were written by journalist Gary Webb for the San Jose Mercury News in 1996 under the series title “The Dark Alliance.” The articles, which alleged a connection between the Contras, the CIA and drug trafficking, quickly roused a strong reaction throughout the U.S. and triggered a smear campaign. Webb’s career was destroyed shortly after these articles were published by right-wing Reaganite journalists in support of the Contras.

The following copies were obtained from the website of the Seattle Times, since the San Jose Mercury News where they first appeared has removed the entire Gary Webb series from their web site.

How cheap cocaine became the scourge of the inner city

For the past 1 1/2 years, the U.S. Department of Justice has been trying to explain why nearly everyone convicted in California’s federal courts of “crack” cocaine trafficking is black.

Critics, including some federal-court judges, say it looks like the Justice Department is targeting crack dealers by race, which would be a violation of the Constitution.

Federal prosecutors, however, say there’s a simple, if unpleasant, reason for the lopsided statistics: Most crack dealers are black.

But why – of all the ethnic and racial groups in California to pick from – crack planted its deadly roots in L.A.’s black neighborhoods is something Oscar Danilo Blandon Reyes may be able to answer.

Blandon is the Johnny Appleseed of crack in California – the Crips’ and Bloods’ first direct connect to the cocaine cartels of Colombia. The tons of cut-rate cocaine he brought into black L.A. during the 1980s and early 1990s became millions of rocks of crack, which spawned new markets wherever they landed.

On a tape made by the Drug Enforcement Administration in July 1990, Blandon casually explained the flood of cocaine that coursed through the streets of South-Central Los Angeles during the previous decade.

“It ain’t that Japanese guy you were talking about, is it?” asked DEA informant John Arman, who was wearing a hidden transmitter.

But unlike the thousands of young blacks now serving long federal prison sentences for selling mere handfuls of the drug, Blandon is a free man today. He has a spacious new home in Nicaragua and a business exporting precious woods, courtesy of the U.S. government, which has paid him more than $166,000 over the past 18 months, records show – for his help in the war on drugs.

That turn of events both amuses and angers “Freeway Rick” Ross, L.A.’s premier crack wholesaler during much of the 1980s and Blandon’s biggest customer.

“They say I sold dope everywhere, but, man, I know he done sold 10 times more dope than me,” Ross said during a recent interview.

Nothing epitomizes the drug war’s uneven impact on black Americans more clearly than the intertwined lives of Ricky Donnell Ross, a high-school dropout, and his suave cocaine supplier, Blandon, who has a master’s degree in marketing and was one of the top civilian leaders in California of an anti-communist guerrilla army formed by the U.S. Central Intelligence Agency. Called the Fuerza Democratica Nicaraguense (FDN), it became known to most Americans as the contras.

In recent court testimony, Blandon, who began dealing cocaine in South-Central L.A. in 1982, swore that the first kilo of cocaine he sold in California was to raise money for the CIA’s army, which was trying on a shoestring to unseat Nicaragua’s new socialist Sandinista government.

After Blandon crossed paths with Ross, a South-Central teenager with gang connections and street smarts necessary to move the army’s cocaine, a blizzard engulfed the ghettos.

Former Los Angeles police narcotics detective Stephen Polak said he was working the streets of South-Central in the mid-1980s when he and his partners began seeing more cocaine than ever before.

“A lot of detectives, a lot of cops, were saying, `hey, these blacks, no longer are we just seeing gram dealers. These guys are doing ounces; they were doing keys,’ ” Polak recalled. But he said the reports were disregarded by higher-ups who couldn’t believe black neighborhoods could afford the amount of cocaine the street cops claimed to be seeing.

“Major Violators (the LAPD’s elite anti-drug unit) was saying, basically, `ahh, South-Central, how much could they be dealing?’ ” said Polak. “Well, they (black dealers) went virtually untouched for a long time.”

It wasn’t until January 1987 – when crack markets were popping up in major cities all over the nation – that law-enforcement brass decided to confront L.A.’s crack problem head-on. They formed the Freeway Rick Task Force, a cadre of veteran drug agents whose sole mission was to put Rick Ross out of business. Polak was a charter member.

“We just dedicated seven days a week to him. We were just on him at every move,” Polak said.

Ross, as usual, was quick to spot a trend. He moved to Cincinnati and quietly settled into a woodsy, suburban home.

“I called it cooling out, trying to back away from the game,” Ross said. “I had enough money.”

His longtime supplier, Blandon, reached the same conclusion about the same time. He moved to Miami with $1.6 million in cash and invested in several businesses.

But neither Ross nor Blandon stayed “retired” for long.

Plunging back in, the crack tycoon cornered the Cincinnati market using the same low-price, high-volume strategy – and the same Nicaraguan drug connections – he’d used in L.A. Soon, he also was selling crack in Cleveland, Indianapolis, Dayton and St. Louis.

“There’s no doubt in my mind crack in Cincinnati can be traced to Ross,” police officer Robert Enoch told a Cincinnati newspaper three years ago.

But Ross’ reign in the Midwest was short-lived. In 1988, one of his loads ran into a drug-sniffing dog at a New Mexico bus station, and drug agents eventually connected it to Ross. He pleaded guilty to crack trafficking charges and received a mandatory 10-year prison sentence, which he began serving in 1990.

He returned to the San Francisco Bay Area and began brokering cocaine again, buying and selling from the Nicaraguan dealers he’d known in his days with the FDN. In 1990 and 1991, he testified, he sold about 425 kilos of cocaine in Northern California – $10.5 million worth at wholesale prices.

But unlike before, when he was selling cocaine for the contras, Blandon was constantly dogged by the police.

Twice in six months he was detained, first by Customs agents while taking $117,000 in money orders to Tijuana to pay a supplier, and then by the LAPD when he was in the act of paying one of his Colombian suppliers more than $350,000.

The second time, after police found $14,000 in cash and a small quantity of cocaine in his pocket, he was arrested. But the U.S. Justice Department – saying a prosecution would disrupt an active investigation – persuaded the police to drop their money-laundering case.

Soon after that, Blandon and his wife, Chepita, were arrested by DEA agents on charges of conspiracy to distribute cocaine. They were jailed without bond as dangers to the community, and several other Nicaraguans also were arrested.

The prosecutor, L.J. O’Neale, told a federal judge that Blandon had sold so much cocaine in the United States his mandatory prison sentence was “off the scale.”

Then Blandon “just vanished,” said Juanita Brooks, a San Diego attorney who represented one of Blandon’s co-defendants. “All of a sudden his wife was out of jail and he was out of the case.”

The reasons were contained in a secret Justice Department memorandum filed in San Diego federal court in late 1993.

Blandon, prosecutor O’Neale wrote, had become “valuable in major DEA investigations of Class I drug traffickers.” And even though probation officers were recommending a life sentence and a $4 million fine, O’Neale said the government would be satisfied if Blandon got 48 months and no fine. Motion granted.

Less than a year later, records show, O’Neale was back with another idea: Why not just let Blandon go? After all, he wrote the judge, Blandon had a federal job waiting.

O’Neale, saying that Blandon “has almost unlimited potential to assist the United States,” said the government wanted “to enlist Mr. Blandon as a full-time, paid informant after his release from prison.”

After only 28 months in custody, most of it spent with federal agents who debriefed him for “hundreds of hours,” he said, Blandon walked out of the Metropolitan Correctional Center in San Diego, was given a green card and began working on his first assignment: setting up his old friend, “Freeway Rick,” for a sting.

Soon after Ross went to prison for the Cincinnati bust, federal prosecutors offered him a deal. His term would be shortened by five years in return for testimony in a federal case against Los Angeles County Sheriff’s detectives that included members of the old Freeway Rick Task Force.

Within days of Ross’ parole in October 1994, he and Blandon were back in touch, and their conversation quickly turned to cocaine.

According to tapes Blandon made of some of their discussions, Ross repeatedly told Blandon that he was broke and couldn’t afford to finance a drug deal. But Ross did agree to help his old mentor, who was also pleading poverty, find someone else to buy the 100 kilos of cocaine Blandon claimed he had.

On March 2, 1995, in a shopping-center parking lot in National City, near San Diego, Ross poked his head inside a cocaine-laden Chevy Blazer, and the place exploded with police.

Ross jumped into a friend’s pickup and zoomed off “looking for a wall that I could crash myself into,” he said. “I just wanted to die.” He was captured after the truck careened into a hedgerow. He has been held in jail without bond since then.

Ross’ arrest netted Blandon $45,500 in government rewards and expenses, records show. On the strength of Blandon’s testimony, Ross and two other men were convicted of cocaine-conspiracy charges in San Diego last March – conspiring to sell the DEA’s cocaine. Sentencing was set for today. Ross is facing a life sentence without the possibility of parole. The other men are looking at 10- to 20-year sentences.

Acquaintances say Blandon, who refused repeated interview requests, is a common sight these days in Managua’s better restaurants, drinking with friends and telling of his “escape” from U.S. authorities.

According to his Miami lawyer, Blandon spends most of his time shuttling between San Diego and Managua, trying to recover Nicaraguan properties seized in 1979, when the Sandinistas took power.