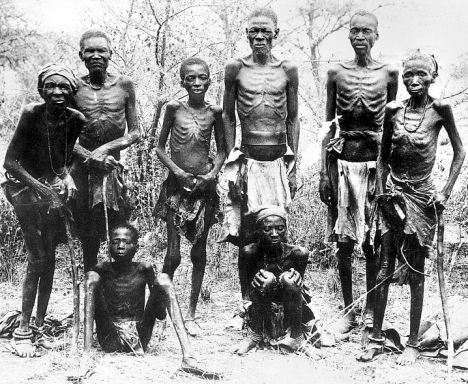 The Herero and Namaqua Genocide is considered the first genocide of the 20th century. It occurred from 1904 until 1907 in German South-West Africa (modern day Namibia), during the scramble for Africa.

In 1904 in the German territory of South West Africa, today’s Namibia, German troops led by General Lothar von Trotha mercilessly put down a rebellion of the indigenous Herero people. General von Trotha once remarked he wanted to exterminate “the revolting tribes in rivers of blood.” By the time the conflict ended four years later, between 65,000-100,000 Herero were killed, many of whom suffered in work camps some consider the forerunners to WWII-era concentration camps.

Between 50% and 75% of the Herero nation perished during the conflict and from the horrors that followed. Those captives who were placed in labor camps suffered systematic rape and brutal floggings.

The annihilation of the Herero was made formal policy on October 2nd in General von Trotha’s infamous Vernichtungsbefehl or extermination order:

“I, the great general of the German soldiers, send this letter to the Herero people. The Hereros are no longer German subjects. They have murdered and robbed, they have cut off the ears and noses and privy parts of wounded soldiers, and they are now too cowardly to fight. I say to the nation: Any person who delivers one of the Herero captains as a captive to a military post will receive 1,000 Marks. The one who hands over Samuel will receive 5,000 Marks. All Herero must leave the country. If they do not, I will force them with cannons to do so. Within the German frontier every Herero, with or without a gun, with or without cattle, will be shot. I will not take over any more women and children, but I will either drive them back to your people or have them fired on. These are my words to the Herero people. The great General of the Mighty Kaiser, von Trotha.”

Africa is almost certainly the birthplace of the human species. From it the earliest people ventured into Asia and then across the long-vanished land bridge to the Americas, or across the Pacific island chains to Australasia. They also spread to the lands north of the Mediterranean Sea. Many thousands of years later their European descendants gained glory and wealth by rediscovering the southern hemisphere, and plundering it. They – we – have often treated it, and its inhabitants, with brutality, indifference and contempt. White Europeans forced black Africans to become slaves. White Europeans deprived black people of their homes and communities and cultures. White Europeans sent their missionaries to change black people’s religion to their own. And in the 19th century white Europeans began moving into Africa to occupy the land as well. The land was desirable for itself: it provided new territory, new possessions and new trade, both for individuals and their countries. The land had other values, too: it provided bases for further take-overs and further military threats; and, above all, it contained riches.

Along the coastline of Namibia runs the Namib desert, a 1,200 mile long strip of unwelcoming sand dunes and barren rock. Behind it is the central mountain plateau, and east of that the Kalahari desert. Namibia’s scarcest commodity is water: this is a country of little rainfall, and the rivers don’t always run. But the very sand of the Skeleton Coast is the dust of gemstones; uranium, tin and tungsten can be mined in the central Namib, and copper in the north; and in the south there are diamonds. Namibia also has gold, silver, lithium, and natural gas. For most of the region’s history, only metal was of interest to the native tribes. These tribes lived and traded together more or less peacefully, each with their own particular way of living, wherever the land was fertile enough. The San were nomads, hunters and gatherers. The Damara hunted and worked copper. The Ovambo grew crops in the north, where there was more rain, but also worked in metal. The Nama and the Herero were livestock farmers, and they were the two main tribes in the 1840s when the Germans (first missionaries, then settlers, then soldiers) began arriving in South West Africa.

Before the Germans, only a few Europeans had visited it: explorers, traders and sailors. They opened up trade outlets for ivory and cattle; they also brought in firearms, with which they traded for Namib treasures. Later, big guns and European military systems were introduced. The tribes now settled their disputes with lethal violence: corruption of a peaceful culture was under way.

In the 1880s Germany made South West Africa their own colony, and settlers moved in, followed by a military governor who knew little about running a colony and nothing at all about Africa. Major Theodor Leutwein began by playing off the Nama and Herero tribes against each other. More and more white settlers arrived, pushing tribesmen off their cattle-grazing lands with bribes and unreliable deals. The Namib’s diamonds were discovered, attracting yet more incomers with a lust for wealth.

Tribal cattle-farmers had other problems, too: a cattle-virus epidemic in the late 1890s killed much of their livestock. The colonists offered the Herero aid on credit. As a result the farmers amassed large debts, and when they couldn’t pay them off the colonists simply seized what cattle were left. In January 1904, the Herero, desperate to regain their livelihoods, rebelled. Under their leader Samuel Maherero they began to attack the numerous German outposts. They killed German men, but spared women, children, missionaries, and the English or Boer farmers whose support they didn’t want to lose.

At the same time, the Nama chief, Hendrik Witbooi, wrote a letter to Theodor Leutwein, telling him what the native Africans thought of their invaders, who had taken their land, deprived them of their rights to pasture their animals on it, used up the scanty water supplies, and imposed alien laws and taxes. His hope was that Leutwein would recognise the injustice and do something about it.

The German Emperor replaced Major Leutwein with another commander, this time a man notorious for brutality who had already fiercely suppressed African resistance to German colonisation in East Africa. Lieutenant-General Lothar von Trotha said, ‘I wipe out rebellious tribes with streams of blood and streams of money. Only following this cleansing can something new emerge’. Von Trotha brought with him to German South West Africa 10,000 heavily-armed men and a plan for war.

Under his command, the German troops slowly drove the Herero warriors to a position where they could be hemmed in by attack on three sides. The fourth side offered escape; but only into the killing wastes of the Kalahari desert. The German soldiers were paid well to pursue the Herero into this treacherous wilderness. They were also ordered to poison the few water-holes there. Others set up guard posts along a 150-mile border: any Herero trying to get back was killed.

On October 2, 1904, von Trotha issued his order to exterminate the Herero from the region. ‘All the Herero must leave the land. If they refuse, then I will force them to do it with the big guns. Any Herero found within German borders, with or without a gun, will be shot. No prisoners will be taken. This is my decision for the Herero people’.

After the Herero uprising had been systematically put down, by shooting or enforced slow death in the desert from starvation, thirst and disease (the fate of many women and children), those who still lived were rounded up, banned from owning land or cattle, and sent into labour camps to be the slaves of German settlers. Many more Herero died in the camps, of overwork, starvation and disease.

By 1907, in the face of criticism both at home and abroad, von Trotha’s orders had been cancelled and he himself recalled, but it was too late for the crushed Herero. Before the uprising, the tribe numbered 80,000; after it, only 15,000 remained.

During the period of colonisation and oppression, many women were used as sex slaves. (This had not been von Trotha’s intention. ‘To receive women and children, most of them ill, is a serious danger to the German troops. And to feed them is an impossibility. I find it appropriate that the nation perishes instead of infecting our soldiers.’) In the Herero work camps there were numerous children born to these abused women, and a man called Eugen Fischer, who was interested in genetics, came to the camps to study them; he carried out medical experiments on them as well. He decided that each mixed-race child was physically and mentally inferior to its German father (a conclusion for which there was and is no respectable scientific foundation whatever) and wrote a book promoting his ideas: ‘The Principles of Human Heredity and Race Hygiene’. Adolf Hitler read it while he was in prison in 1923, and cited it in his own infamous pursuit of ‘racial purity’.

The Nama suffered at the hands of the colonists too. After the defeat of the Herero the Nama also rebelled, but von Trotha and his troops quickly routed them. On April 22 1905 Lothar von Trotha sent his clear message to the Nama: they should surrender. ‘The Nama who chooses not to surrender and lets himself be seen in the German area will be shot, until all are exterminated. Those who, at the start of the rebellion, committed murder against whites or have commanded that whites be murdered have, by law, forfeited their lives. As for the few not defeated, it will fare with them as it fared with the Herero, who in their blindness also believed that they could make successful war against the powerful German Emperor and the great German people. I ask you, where are the Herero today?’ During the Nama uprising, half the tribe (over 10,000) were killed; the 9,000 or so left were confined in concentration camps.

One thought on “Herero and Namaqua Genocide”