The mutilation and death in custody of a 13-year-old child has sparked further furious protests in Syrian city of Daraa.

Hamza al-Khateeb used to love it when the rains came to his small corner of southern Syria, filling up the farmers’ irrigation channels enough so that he and the other children could jump in and swim.

But the drought of the last few years had left the 13-year-old without the fun of his favourite pool.

Instead, he’d taken to raising homing pigeons, standing on the roof of his family’s simple breeze-block home, craning his neck back to see the birds circling above the wide horizon of fields, where wheat and tomatoes were grown from the tough, scrubby soils.

Though not from a wealthy family himself, Hamza was always aware of others less fortunate than himself, said a cousin who spoke to Al Jazeera.

“He would often ask his parents for money to give to the poor. I remember once he wanted to give someone 100 Syrian Pounds ($2), and his family said it was too much. But Hamza said, ‘I have a bed and food while that guy has nothing.’ And so he persuaded his parents to give the poor man the 100.”

In the hands of President Bashar al-Assad’s security forces, however, Hamza found no such compassion, his humanity degraded to nothing more than a lump of flesh to beat, burn, torture and defile, until the screaming stopped at last.

Arrested during a protest in Saida, 10km east of Daraa, on April 29, Hamza’s body was returned to his family on Tuesday 24th May, horribly mutilated.

The child had spent nearly a month in the custody of Syrian security, and when they finally returned his corpse it bore the scars of brutal torture: Lacerations, bruises and burns to his feet, elbows, face and knees, consistent with the use of electric shock devices and of being whipped with cable, both techniques of torture documented by Human Rights Watch as being used in Syrian prisons during the bloody three-month crackdown on protestors.

Hamza’s eyes were swollen and black and there were identical bullet wounds where he had apparently been shot through both arms, the bullets tearing a hole in his sides and lodging in his belly.

On Hamza’s chest was a deep, dark burn mark. His neck was broken and his penis cut off.

“Where are the human rights committees? Where is the International Criminal Court?” asks the voice of the man inspecting Hamza’s body on a video uploaded to YouTube.

“A month had passed by with his family not knowing where he was, or if or when he would be released. He was released to his family as a corpse. Upon examining his body, the signs of torture are very clear.”

The original clip has since been removed, but a version with Hamza’s castrated genitals blurred is still running [Note: this video is extremely graphic].

“When Hamza’s mother came to see the body she was only shown his face,” said the cousin, who was present at the time.

“We tried to tell the father not to look, but he pulled the blanket back. When he saw Hamza’s body he fainted. People ran to help him and some started filming – it was chaos.” 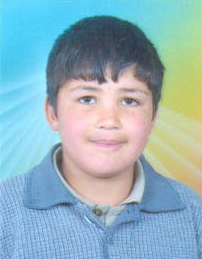 April 29 was dubbed “The Friday of Ending the siege on Deraa”, the border city where the torture of children had lit the spark for the Syrian uprising and where Maher al-Assad’s forces lead the assault on a civilian population that killed hundreds.

Hamza didn’t burn for politics, said his cousin, “but everybody seemed to be going to the protest, so he went along as well,” walking with friends and family the 12km along the road from his home town of Jeezah north-west to Saida.

The firing began almost as soon as the villagers reached the edge of Saida, said the cousin.

“People were killed and wounded, some were arrested. It was chaotic we didn’t know at that point what had happened to Hamza. He just disappeared.”

A second source from the region, an activist, also spoke to Al Jazeera, confirming that Hamza had been among 51 protesters detained on April 29, he said, by Airforce Intelligence, which a number of detainees have reported as using brutal torture.

“They were all arrested by the anti-terrorism branch of the Airforce Intelligence,” said the activist.

“They were all alive when they went into prison, but we received 13 bodies back this week and all had been tortured. The Airforce Intelligence are notorious for torture, they’re barbarians. We’re expecting another dozen bodies back in the coming days.”

Responding to the video of Hamza’s mutilated body, Syria’s only private TV station, the pro-regime Al Dunia, aired an interview (Arabic) with a forensic doctor from Damascus’ Tishreen Militarily Hospital.

Dr. Akram al-Shaar, who claimed to have supervised the autopsy of Hamza in Tishreen, said he found no signs of torture, claiming the marks on Hamza’s body had been caused by natural decomposition.

Dr Shaar’s testimony, however, is also the first public admission by a Syrian official that civilians arrested or injured or killed during the military assault on the Deraa region have been collected and transported to security facilities in Damascus.

Earlier this month, the Damascus Center for Human Rights Studies (DCHRS) reported that the bodies of 244 civilians killed in the military assault on Deraa had been transported to Tishreen Military hospital, consistent with an apparent systematic regime campaign, first reported by Al Jazeera, to disrupt the treatment of dead and dying protestors.

After Hamza’s body was filmed so the world could see how he died, the boy was buried in Jizah after last prayers for his soul in the local mosque. Following the ceremony, children walked through the streets of Jizah holding up a photo of Hamza and a banner that said he died a martyr, 13-years-old, under the brutal torture of the security forces.

All foreign media are barred from Syria but experienced local journalists and human rights researchers found no reason to doubt the authenticity of the footage of Hamza.

‘A crime against humanity’

Hamza’s father, Ali al-Khateeb, wanted to press charges against the army and security forces, said Hamza’s cousin. Instead, Ali and his wife were visited by the secret police and threatened.

“They said: ‘Enough of what has happened because of you already. You know what would happen if we heard you had spoken to the media,'” said Hamza’s mother, clearly terrified as she spoke to the local activist, refusing to give further details on the circumstances of her son’s arrest or death.

Hamza’s father was briefly detained late Saturday afternoon, said his wife, after the secret police demanded he tell state media that Hamza was killed by armed Salafists, Sunni Muslim extremists, which the regime has claimed are driving the popular uprising.

“The father was asked to go to the security branch for half an hour so they could tell him their point of view about Hamza,” said the cousin. “He was well treated.”

Torture in Syrian prisons, long known as some of the worst in the world, is now “rampant” according to a report by Human Rights Watch.

“When you have mass execution and torture it rises to the level of a crime against humanity. In Syria, it appears clear that this has become widespread and systematic,” said Ricken Patel, director of Avaaz, which has been documenting human rights abuses in the country.

“This is a campaign of mass terrorism and intimidation: Horribly tortured people sent back to communities by a regime not trying to cover up its crimes, but to advertise them.”

If advertising its crimes is indeed the regime’s strategy then it appears to be working: Within hours of the video of Hamza’s mutilated body going online a protest broke out in Daraa city by hundreds of furious residents, defying the ongoing military siege to express their outrage at Hamza’s torture and killing.

“People here are really furious about what happened to Hamza and this is another sign that the secret police and the authorities are criminals who cannot be trusted to make any reforms,” said the activist, who travels widely in the Deraa region.

A week after his body was returned, a Facebook page dedicated to Hamza had more than 60,000 followers, under the title, “We are all Hamza al-Khateeb”, a deliberate echo of the online campaign on behalf of Khaled Saeed, the young Egyptian whose death in police custody last year proved a trigger for the revolution in Cairo.

From the other end of Syria, in the far north-east, Rezan Mustapha, spokesman of the opposition Kurdish Future Movement said he and others had also seen the horrifying footage.

“This video moved not only every single Syrian, but people worldwide. It is unacceptable and inexcusable. The horrible torture was done to terrify demonstrators and make them stop calling for their demands.”

But, said Mustapha, protestors would only be spurred on by such barbarity.

“More people will now go to the street. We hold the Syrian secret police fully responsible for the torturing and killing of this child, even if they deny it.”

Some reactions didn’t need any words at all. Though only one among his 20 other children from two wives, Hamza’s 65-year-old father Ali appeared no less devastated by Hamza’s murder than if he had lost his only son.

“How would any family feel if they saw that video of their own child?” asked Hamza’s cousin. “I have never seen Hamza’s father cry in his entire life. Now we see only tears in his eyes.”