Seventy years ago, in the autumn of 1941, one of the fiercest World War II battles – the Battle of Moscow – took place. For Hitler, whose army had easily marched its way through half of Europe, it was the first serious defeat.

When in June 1941 Hitler moved his troops into the Soviet Union, he counted on winning the war within just four months. His hopes were not unfounded. The surprise factor, the manpower and technical superiority, the two-year war experience in Western Europe and the military and political mistakes of the Soviet government enabled Hitler to occupy a significant part of the Soviet territory. By October, German troops were approaching Moscow. Hitler was so confident of success he had even had a granite slab prepared for a victory monument he planned to erect after Moscow was ruined.

Moscow was Hitler’s priority, so he threw his most powerful well-equipped Army Center Group into battle. On October 2, a blitzkrieg offensive codenamed Typhoon began.

The Nazis stormed forward and partially broke through Soviet defenses in a blistering attack that did seem like a typhoon first. They came very close to Moscow. A super agent, SS Standartenfuhrer Otto Scorzeny, recalled afterwards: “We occupied a small village 15 km northwest of Moscow. In good weather we could even see Moscow from the local belfry… Western newspapers wrote: “The Russian bear is dead. It would take a miracle to save Moscow”.

War-time documentaries offer glimpses of strenuous defense preparations. Bracing for street combat, Muscovites were digging trenches and anti-tank ditches, building barricades and repulsing enemy air strikes. Unskilled volunteers, most of whom had never held a gun before, were practicing shooting. Government offices, residents and material values were being evacuated. Stalin ordered to mine important facilities and blow them up should the enemy enter in the city.

At that critical moment for the country, General Georgy Zhukov was appointed commander of the Moscow Front. A few words about him:

Zhukov seemed to be destined for the army. Symbolically, he bore the name of the Ancient Roman military leader St. George the Conqueror. Napoleon once said that a commander’s brain should be in optimal proportion to his will. That fully applied to Zhukov. He had a strong mind and the will of iron. He hated incompetence and sloppiness, falsity and lies. Being exceptionally self-disciplined and responsible himself, he demanded the same from people who worked with him. His military talents showed themselves to the fullest during the war against Nazi Germany in 1941-1945. Zhukov had the rare gift of foresight based on his intuition, analytical mind and the deepest knowledge of the situation. He credited the German army for being the world’s strongest army and looked upon German generals as the most experienced and competent commanders. That’s why, while planning an offensive, he demanded exhaustive information about the enemy, including German generals. “In order to fight a stronger enemy successfully, one needs to know more about him,” Zhukov used to say. The Germans, for their part, closely watched Zhukov’s advance, rightfully considering that his appearance in some place or other meant that something serious was up. Zhukov masterminded and directed large-scale operations that tipped the scales in favor of the Soviet Army. His final chord was the Battle of Berlin in early May of 1945. After Berlin fell, Marshal Georgy Zhukov accepted Nazi Germany’s surrender on behalf of the Soviet government.

But back in October 1941, when Moscow was under siege, the then Soviet ruler Josef Stalin phoned Zhukov and asked him: “Are you sure we will retain Moscow? I am asking you with an aching heart. Tell me honestly”.

Zhukov answered firmly: “We will retain Moscow by all means. But we will need at least two more armies and at least 200 tanks”. 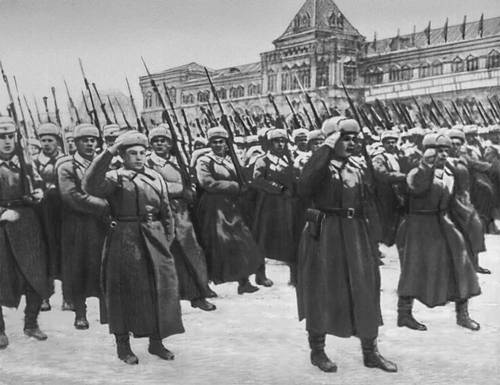 He conceived a bold plan that would enable him not only to halt the enemy’s advance but to counterattack.

“We mapped out the plan and submitted it. Reconnaissance data enabled the command to determine the direction of the main blow. Now that we knew where the most dangerous sector was, we built a multi-layered defense. When the battle began, the Germans were surprised to meet such fierce resistance. The enemy sustained heavy losses,” recalled Marshal Zhukov.

The Battle of Moscow raged through October and into November when the Soviet government decided to stage the traditional November 7 military parade on Red Square to commemorate the Bolshevik Revolution and to demonstrate the high morale of the troops. That was the most unusual parade in Russia’s history.

“Slavyanka Farewell”, composed by Vasily Agapkin, a regimental trumpet-major, in 1912, is by far the most popular march in Russia. The year 1912 was the time when the peoples of the Balkans began their war of liberation against the Turkish yoke. Vasily Agapkin dedicated the march to the women who were seeing their sons, husbands and fiancés off to war. As time went on, Vasily Agapkin became a musician, conductor and composer. He served in the army for 62 years. The most memorable day of his long and eventful life was November 7, 1941, and the military parade he personally took part in.

In the fall of 1941 Nazi troops approached Moscow. The Russian capital was in a siege. This notwithstanding, the Government decreed that the traditional military parade be held in Red Square to celebrate another anniversary of the Bolshevik Revolution and demonstrate to the world the high morale of the Red Army. On a very short notice, on November the 2nd, the bandmaster Vasily Agapkin was given an order to put together a consolidated military band that would participate in the parade. It was a rather challenging project considering that most musicians at the time were at the front line. The only option left was assemble the band using the field musicians from the military units stationed in Moscow. Agapkin was running out of time with just one full day and two nights before the parade. And yet, with just two rehearsals he managed to fine-tune the newly-formed band and make the players perform orderly. 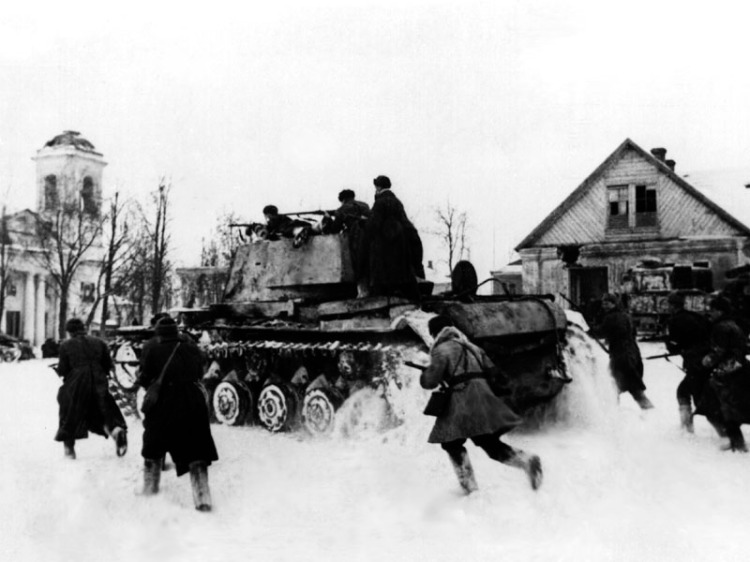 The early morning of November 7, 1941, was somber, windy and cold. Before dawn military convoys had converged just outside Red Square. The parade was to begin at 8:00; it was still dark in November, and the event would not be an easy target for a possible German air raid.

Regimental bands arrived at the Historical Museum right on time. They assumed a formation of a large consolidated band and marched on to Red Square .The band took their position on Red Square forming a perfect triangle. The musicians were rubbing their hands, cleaning the snow off their hats and instruments. Someone shouted, “The keys are freezing! How are we going to play?” Agapkin was alarmed. There was no alcohol handy to moisten the keys. Nobody had anticipated the sudden drop in temperature and a blizzard within just to a couple of hours. Agapkin regained composure and gave an order, “Instruments under the coats!” Small brass were easy to cover with uniform coats, but what about the basses? They had to be covered with the coat flaps, and the keys had to be warmed up with hands.

The Kremlin clock chimed eight. Marshall Budenny galloped on horseback from the Spassky Gate. Bandmaster Agapkin swung his arms, and the band began to play…

Having accepted the parade commanding officer’s report, Marshall Budenny headed for the Government stands at the Mausoleum.

“Word to be passed,” the fanfares solemnly announced. The Commander-in-Chief, Josef Stalin addressed the people. He briefly touched on the temporary setbacks at the front line and expressed complete confidence in victory.

Stalin’s speech was followed by the parade. The band thundered out a march.

Agapkin, standing on a special podium, cheered up. The band was playing smoothly and confidently. Like clockwork they moved on from one tune to another. Foot troops were followed by cavalry. And then the tanks rolled onto Red Square.

During that parade Agapkin’s masterpiece was played as well… The papers later wrote, “That was the most astounding parade in history…”

Meanwhile, trainloads of weapons and ammunitions from all over Russia were hurrying towards Moscow and additional troops were being rushed in. For weeks the enemy maintained superiority that seemed almost unshakeable when suddenly, on December 5, 1941, the Soviet troops launched a surprise counterattack and forced the enemy to retreat. That was Hitler’s first defeat and it sent the myth about his invincible army crumbling. Chief of Staff of the German Ground Forces Colonel General Franz Halder wrote in his diary: “We will never again have such military strength as we had in June 1941”. Indeed, Wehrmacht lost the bulk of its elite troops in that battle, which in Halder’s opinion was a “disaster” and the “beginning of the tragedy in the East”. The Battle of Moscow was the first major success of the Soviet army during the early stages of the war and its moral, political and patriotic significance was enormous.