The Massacre at Sabra and Shatila, Thirty Years Later 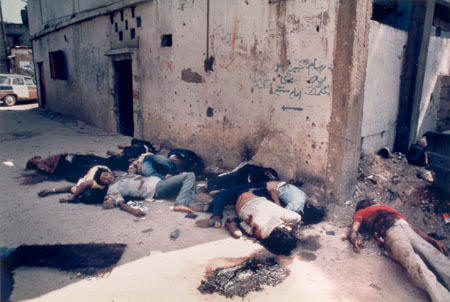 It happened thirty years ago – 16 September 1982. A massacre so awful that people who know about it cannot forget it. The photos are gruesome reminders – charred, decapitated, indecently violated corpses, the smell of rotting flesh, still as foul to those who remember it as when they were recoiling from it all those years ago. For the victims and the handful of survivors, it was a 36-hour holocaust without mercy. It was deliberate, it was planned and it was overseen. But to this day, the killers have gone unpunished.

Sabra and Shatila – two Palestinian refugee camps in Lebanon – were the theatres for this staged slaughter. The former is no longer there and the other is a ghostly and ghastly reminder of man’s inhumanity to men, women and children – more specifically, Israel’s inhumanity, the inhumanity of the people who did Israel’s bidding and the world’s inhumanity for pretending it was of no consequence. There were international witnesses – doctors, nurses, journalists – who saw the macabre scenes and have tried to tell the world in vain ever since.

Each act was barbarous enough on its own to warrant fear and loathing. It was human savagery at its worst and Dr Ang Swee Chai was an eye witness as she worked with the Palestinian Red Crescent Society on the dying and the wounded amongst the dead. What she saw was so unimaginable that the atrocities committed need to be separated from each other to even begin comprehending the viciousness of the crimes. [1]

People Tortured. Blackened bodies smelling of roasted flesh from the power shocks that had convulsed their bodies before their hearts gave out – the electric wires still tied around their lifeless limbs

People with gouged out eye sockets. Faces unrecognisable with the gaping holes that had plunged them into darkness before their lives were thankfully ended.

Women raped. Not once – but two, three, four times – horribly violated, their legs shamelessly ripped apart with not even the cover of clothing to preserve their dignity at the moment of death.

Children dynamited alive. So many body parts ripped from their tiny torsos, so hard to know to whom they belonged – just mounds of bloodied limbs amongst the tousled heads of children in pools of blood.

Families executed. Blood, blood and more blood sprayed on the walls of homes where whole families had been axed to death in a frenzy or lined up for a more orderly execution.

There were also journalists who were there in the aftermath and who had equally gruesome stories to tell, none of which made the sort of screaming front page headlines that should have caused lawmakers to demand immediate answers. What they saw led them to write shell-shocked accounts that have vanished now into the archives, but are no less disturbing now. These accounts too need to be individually absorbed, lest they be lumped together as just the collective dead rather than the systematic torture and killing of individual, innocent human beings.

Women gunned down while cooking in their kitchens. [2] The headless body of a baby in diapers lying next to two dead women. [3] An infant, its tiny legs streaked with blood, shot in the back by a single bullet. [4] Slaughtered babies, their bodies blackened as they decomposed, tossed into rubbish heaps together with Israeli army equipment and empty bottles of whiskey. [5] An old man castrated, with flies thick upon his torn intestines. [6] Children with their throats slashed. [7] Mounds of rotting corpses bloated in the heat – young boys all shot at point-blank range. [8]

And most numbing of all are the recollections of the survivors whose experiences were so shockingly traumatic that to recall them must have been painful beyond all imaginings. One survivor, Nohad Srour, 35 said:

“I was carrying my one year-old baby sister and she was yelling “Mama! Mama!” then suddenly nothing. I looked at her and her brain had fallen out of her head and down my arm. I looked at the man who shot us. I’ll never forget his face. Then I felt two bullets pierce my shoulder and finger. I fell. I didn’t lose consciousness, but I pretended to be dead.”[9]

The statistics of those killed vary, but even according to the Israeli military, the official count was 700 people killed while Israeli journalist, Amnon Kapeliouk put the figure at 3,500. [10] The Palestinian Red Crescent Society put the number killed at over 2,000.[11] Regardless of the numbers, they would not and could not mitigate what are clear crimes against humanity.

Fifteen years later, Robert Fisk, the journalist who had been one of the first on the scene, said:

“Had Palestinians massacred 2,000 Israelis 15 years ago, would anyone doubt that the world’s press and television would be remembering so terrible a deed this morning? Yet this week, not a single newspaper in the United States – or Britain for that matter – has even mentioned the anniversary of Sabra and Shatila.”[12]

Thirty years later it is no different.

What happened must be set against the background of a Lebanon that had been invaded by the Israeli army only months earlier, supposedly in ‘retaliation’ for the attempted assassination of the Israeli Ambassador in London on 4 June 1982. Israel attributed the attempt to Arafat’s Palestinian Liberation Organisation (PLO) then resident in Beirut. In reality, it was a rival militant group headed by Abu Nidal. Israel wanted to oust the PLO from Lebanon altogether and on 6 June 1982, Israel began its devastating assault on the Lebanese and Palestinian civilian population in the southern part of Lebanon. Lebanese government casualty figures numbered the dead at around 19,000 with some 30,000 wounded, but these numbers are hardly accurate because of the mass graves and other bodies lost in the rubble. [13]

By 1 September, a cease-fire had been mediated by United States envoy Philip Habib, and Arafat and his men surrendered their weapons and were evacuated from Beirut with guarantees by the US that the civilians left behind in the camps would be protected by a multinational peacekeeping force. That guarantee was not kept and the vacuum then created, paved the way for the atrocities that followed.

As soon as the peacekeeping force was withdrawn, the then Israeli Defence Minister Ariel Sharon moved to root out some “2,000 terrorists” he claimed were still hiding in the refugee camps of Sabra and Shatila. After totally surrounding the refugee camps with tanks and soldiers, Sharon ordered the shelling of the camps and the bombardment continued throughout the afternoon and into the evening of 15 September leaving the “mopping-up” of the camps to the Lebanese right-wing Christian militia, known as the Phalangists. The next day, the Phalangists – armed and trained by the Israeli army – entered the camps and proceeded to massacre the unarmed civilians while Israel’s General Yaron and his men watched the entire operations. More grotesquely, the Israeli army ensured there was no lull in the 36 hours of killings and illuminated the area with flares at night and tightened their cordon around the camps to make sure that no civilian could escape the terror that had been unleashed.

Inquiries, charges and off scot-free

Although Israel’s Kahan Commission of Inquiry did not find any Israeli directly responsible, it did find that Sharon bore “personal responsibility” for “not ordering appropriate measures for preventing or reducing the danger of massacre” before sending the Phalangists into the camps. It, therefore, lamely recommended that the Israeli prime minister consider removing him from office. [14] Sharon resigned but remained as Minister without portfolio and joined two parliamentary commissions on defence and Lebanese affairs. There is no doubt, as Chomsky points out “that the inquiry was not intended for people who have a prejudice in favour of truth and honesty”, but it certainly gained support for Israel in the US Congress and among the public. [15] It took an International Commission of Inquiry headed by Sean MacBride to find that Israel was “directly responsible” because the camps were under its jurisdiction as an occupying power. [16] Yet, despite the UN describing the heinous operation as a “criminal massacre” and declaring it an act of genocide [17], no one was prosecuted.

It was not until 2001 that a law suit was filed in Belgium by the survivors of the massacre and relatives of the victims against Sharon alleging his personal responsibility. However, the court did not allow for “universal jurisdiction” – a principle which was intended to remove safe havens for war criminals and allow their prosecution across states. The case was won on appeal and the trial allowed to proceed, but without Sharon who by then was prime minister of Israel and had immunity. US interference led to the Belgian Parliament gutting the universal jurisdiction law and by the time the International Criminal Court was established in The Hague the following year, the perpetrators of the Sabra and Shatila massacre could no longer be tried because its terms of reference did not allow it to hear cases of war crimes, crimes against humanity or genocide pre-dating 1 July 2002. Neither Sharon nor those who carried out the massacres have ever been punished for their horrendous crimes.

The length of time since these acts were carried out should be no impediment to exposing the truth. More than 60 years after the Nazi atrocities against the Jews in Europe, the world still mourns and remembers and erects monuments and museums to that violent holocaust. How they are done, to whom they are done and to how many does not make the crimes any more or less heinous. They can never be justified even on the strength of one state’s rationale that another people ought to be punished, or worse still, are simply inferior or worthless beings. It should lead all of us to question on whose judgment are such decisions made and how can we possibly justify such crimes at all?

The atrocities committed in the camps of Sabra and Shatila should be put in the context of an ongoing genocide against the Palestinian people. The MacBride report found that these atrocities “were not inconsistent with wider Israeli intentions to destroy Palestinian political will and cultural identity.” [17] Since Deir Yassin and the other massacres of 1948, those who survived have joined hundreds of thousands of Palestinians fleeing a litany of massacres committed in 1953, 1967, and the 1982 invasion of Lebanon, and the killing continues today. The most recent being the 2008-2009 Gaza massacre – that 3 week merciless onslaught, a festering sore without relief as the people are further punished by an impossible siege that denies them their most basic rights.

Thus were the victims and survivors of the Sabra and Shatila massacre gathered up in the perpetual nakba of the slaughtered, the dispossessed, the displaced and the discarded – a pattern of ethnic cleansing perpetrated under the Zionist plan to finally and forever extinguish Palestinian society and its people.

This is why we must remember Sabra and Shatila, thirty years on.

2 responses to “The Massacre at Sabra and Shatila, Thirty Years Later”