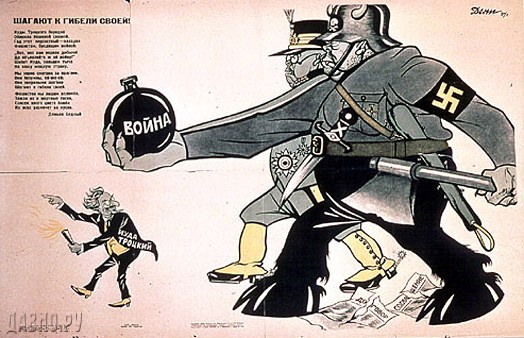 by Ludo Martens
During the thirties, Trotsky literally became the world’s expert on anti-Communism. Even today, right-wing ideologues peruse Trotsky’s works in search of weapons against the Soviet Union under Stalin.

In 1982, when Reagan was again preaching the anti-Communist crusade, Henri Bernard, Professor Emeritus at the Royal Military School of Belgium, published a book to spread the following urgent message:

All of the standard clichés of Le Pen , the fascist French Front National leader, are there:

`Terrorism is not the act of a few crazies. The basis of everything is the Soviet Union and the clandestine network of international terrorism.’

`Christian leftism is a Western wound.
`The synchronicity of `pacifist’ demonstrations shows how they were inspired by Moscow.’

`The British commandos who went to die in the Falklands showed that there still exist moral values in the West.’

But the tactics used by such an avowed anti-Communist as Bernard are very interesting. Here is how a man who,despite despising a `leftist Christian’, will ally himself with Trotsky.

`The private Lenin was, like Trotsky, a human being …. His personal life was full of nuance ….`Trotsky should normally have succeeded Lenin … he was the main architect of the October Revolution, the victor of the Civil War, the creator of the Red Army ….

`Lenin had much respect for Trotsky. He thought of him as successor. He thought Stalin was too brutal ….

`Within the Soviet Union, Trotsky rose up against the imposing bureaucracy that was paralysing the Communist machine ….

`Artist, educated, non-conformist and often prophet, he could not get along with the main dogmatists in the Party ….

`Stalin was nationalist, a sentiment that did not exist either in Lenin or Trotsky …. With Trotsky, the foreign Communist Parties could consider themselves as a force whose sole purpose was to impose a social order. With Stalin, they worked for the Kremlin and to further its imperialist politics.’

We present here a few of the main theses that Trotsky put forward during the years 1937–1940, and that illustrate the nature of his absolute anti-Communist struggle. They allow one to understand why people in the Western security services, such as Henri Bernard, use Trotsky to fight Communists. They also shed some light on the class struggle between Bolsheviks and opportunists and on some aspects of the Purge of 1937–1938.

The enemy is the new aristocracy, the new Bolshevik bourgeoisie

For Trotsky, the main enemy was at the head of the Soviet State: it was the `new Bolshevik aristocracy’, the most anti-Socialist and anti-democratic layer of the society, a social layer that lived like `the well-to-do bourgeois of the United States’! Here is how he phrased it.

`The privileged bureaucracy … now represents the most antisocialist and the most antidemocratic sector of Soviet society.’

`We accuse the ruling clique of having transformed itself into a new aristocracy, oppressing and robbing the masses …. The higher layer of the bureaucracy lives approximately the same kind of life as the well-to-do bourgeois of the United States and other capitalist countries.’

`There are thanks to Stalin, once again `classes’ and rich people …. Just like in a capitalist society, the élite is rewarded with money and power. There is what `Force Ouvrière’ (France) calls a `Soviet aristocracy’. This weekly compares it to the aristocracy created by Napoleon.’

After World War II, the French union Force Ouvrière to which Serrarens was referring was directly created and financed by the CIA. The `Lambertist’ Trotskyist group worked, and still works, inside it. At that time, the CISC, be it in Italy or Belgium, worked directly for the CIA for the defence of the capitalist system in Europe. To mobilize the workers against Communism, it used a revolting `anti-capitalist’ demagoguery that it borrowed from the social-democrats and the Trotskyists: in the Soviet Union, there was a `new class of rich people’, a `Soviet aristocracy’.

Confronting this `new aristocracy, oppressing and robbing the masses’,

there were, in Trotsky’s eyes, `one hundred and sixty millions who are profoundly discontented’.

These `people’ were protecting the collectivization of the means of production and the planned economy against the `ignorant and despotic Stalinist thieves’. In other words, apart from the `Stalinists’, the rest of the society was clean and led just struggles! Listen to Trotsky:

`Twelve to fifteen millions of the privileged — there are the “people” who organize the parades, demonstrations, and ovations …. But apart from this “pays légal” as was once said in France, there exist one hundred and sixty millions who are profoundly discontented ….

`Antagonism between the bureaucracy and the people is measured by the increasing severity of the totalitarian rule ….
`The bureaucracy can be crushed only by a new political revolution.’

`(T)he economy is planned on the basis of nationalization and collectivization of the means of production. This state economy has its own laws that are less and less tolerant of the despotism, ignorance and banditry of the Stalinist bureaucracy.’

Since the re-establishment of capitalism was impossible in Trotsky’s eyes, any opposition, be it social-democratic, revisionist, bourgeois or counter-revolutionary, became legitimate. It was the voice of `one hundred and sixty millions who were profoundly discontented’ and aimed to `protect’ the collectivization of the means of production against the `new aristocracy’. Trotsky became the spokesperson for all the retrograde forces, anti-socialist and fascist.

Trotsky was one of the first to put forward the line that Bolshevism and fascism were twins. This thesis was quite popular, during the thirties, in the reactionary Catholic parties. The Communist Party was their sworn enemy, the fascist party their most important bourgeois opponent. Once again, here is Trotsky:

`Fascism is winning victory after victory and its best ally, the one that is clearing its path throughout the world, is Stalinism.’

`In fact, nothing distinguishes Stalin’s political methods from Hitler’s. But the difference in results on the international scale is remarkable.’

`An important part, which becomes more and more important, of the Soviet apparatus is formed of fascists who have yet to recognize themselves as such. To equate the Soviet régime with fascism is a gross historic error …. But the symmetry of the political superstructures and the similarity of totalitarian methods and of psychological profiles are striking ….
`(T)he agony of Stalinism is the most horrible and most odious spectacle on Earth.’

Trotsky here presented one of the first versions of the essential theme of CIA and fascist propaganda during the fifties, that of `red fascism’. By using the word `fascism’, Trotsky tried to redirect the hatred that the masses felt towards the terrorist dictatorship of big capital, against socialism. After 1944–1945, all the German, Hungarian, Croatian and Ukrainian fascist leaders that fled to the West put on their `democratic’ mask; they praised U.S. `democracy’, the new hegemonic force and the main source of support for retrograde and fascist forces in the world. These `old’ fascists, faithful to their criminal past, all developed the same theme: `Bolshevism is fascism, but even worse’.

Note further that at the time that European fascism had already started its war (wars in Ethiopia and Spain, annexation of Austria and Czechoslovakia), Trotsky was affirming that the `most horrible and most odious spectable’ on Earth was the `agony of socialism’!

Defeatism and capitulation in front of Nazi Germany

Trotsky became the main propagandist for defeatism and capitulationism in the Soviet Union. His demagogic `world revolution’ served to better stifle the Soviet revolution. Trotsky spread the idea that in case of fascist aggression against the Soviet Union, Stalin and the Bolsheviks would `betray’ and that under their leadership, the defeat of the Soviet Union was inevitable. Here are his ideas on this subject:

Once again, there were, on one side, `the 170 million’, the `good’ citizens who were awoken by the Revolution. One might wonder by whom, if it was not by the Bolshevik Party and Stalin: the great peasant masses were certainly not `awoken’ during the years 1921–1928. These `170 million’ had a `developed war industry’. As if it was not Stalin’s collectivization and industrialization policies, implemented thanks to his strong will, that allowed the creation of an arms industry in record time! Thanks to his correct line, to his will, to his capacity to organize, the Bolshevik régime awoke the popular forces that had been kept in ignorance, superstition and primitive individual work. According to the provocateur Trotsky’s rantings, the Bolshevik régime paralyzed that society’s forces! And Trotsky made all sorts of absurd predictions: it was certain that the Bolshevik régime would not survive the war! Hence, two propaganda themes dear to the Nazis can be found in Trotsky’s writings: anti-Bolshevism and defeatism.

`Berlin knows to what extent the Kremlin clique has demoralized the country’s army and population through its struggle for self-preservation ….
`Stalin continues to sap the moral force and the general level of resistance of the country. Careerists with no honor, nor conscience, upon whom Stalin is forced to rely, will betray the country in difficult times.’

In his hatred of Communism, Trotsky incited the Nazis to wage war against the Soviet Union. He, the `eminent expert’ on the affairs of the Soviet Union, told the Nazis that they had every chance of winning the war against Stalin: the army and the population were demoralized (false!), Stalin was destroying the resistance (false!) and the Stalinists would capitulate at the beginning of the war (false!).

In the Soviet Union, this Trotskyist propaganda had two effects. It encouraged defeatism and capitulationism, through the idea that fascism was assured victory given that the USSR had such a rotten and incompetent leadership. It also encouraged `insurrections’ and assassination attempts to eliminate Bolshevik leaders `who would betray in difficult times’. A leadership that was categorically destined to fall during the war might well fall at the beginning of the war. Anti-Soviet and opportunistic groups could therefore make their attempts.

In both cases, Trotsky’s provocations directly helped the Nazis.

One thought on “Ludo Martens: Trotsky’s role on the eve of the Second World War”