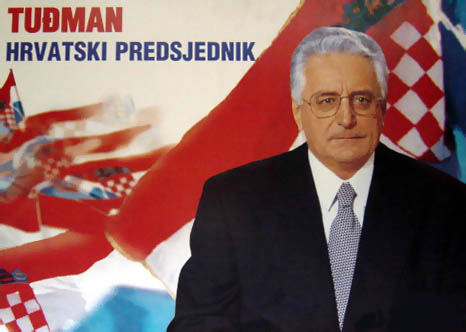 “He was a monster, but he was our monster”
By Justus Leicht and Peter Schwarz
16 December 1999

“Tudjman almost certainly did not care that he was a monster because, unlike Milosevic, he was our monster.” These are the words that the author Misha Glenny uses in his recent book to sum up the relationship between the Western powers and Croatian President Franjo Tudjman, who died in Zagreb on Saturday night.

Tudjman was a nationalist, a racist and anti-Semite. As president and army commander-in-chief he was personally responsible for driving 400,000 Serbs out of Croatia. The country, which originally had a Serbian population of 12 percent, is today almost “Serb-free”.

From the Krajina alone, the Croatian army expelled a quarter million Serbs, who had lived there for centuries. Later, a UN report noted: “New evidence for the atrocities continues to emerge, on average, six corpses a day … the corpses, some fresh, others decayed, are predominantly old men. Many were shot in the back of the head or had their throats cut, others were mutilated…. The crimes were committed by the Croatian army, the Croatian police and Croatian civilians. No efforts were observed of them being ordered to stop, and everything points to a policy of scorched earth.”

In Tudjman’s view, Catholic Croatia was the cultural demarcation line separating the West from the Orthodox Christian and Muslim Balkans. His racist opinions regarding Bosnian Muslims, Jews and Roma were notorious.

As a historian, he had written in the 1960s thick tomes in which he glorified the medieval roots of the Croatian nation and trivialised the atrocities of the fascist Ustasha. During the Second World War, under Hitler’s sponsorship, the Ustasha had established an independent Croatian state. In Jasenovac concentration camp up to 800,000 Serbs, Jews, Roma and anti-fascists were cruelly murdered. Tudjman reduced this number to 30,000 and ascribed quite “positive achievements” to the Ustasha regime, which were “the expression of the historical efforts of the Croatian people”.

Under his presidency, fascist symbols emerged once again. The flag of the new Croatian state was modelled after that of the Ustasha regime, just like the currency of the country. Public squares and roads, named after figures from the Yugoslav guerrilla war against the German armed forces and its collaborators, were now given the names of “heroes” of Croatian nationalism. Anti-fascist films disappeared.

Among Tudjman’s avowed followers was Dinko Sakic, former commander of the Jasenovac concentration camp, who had fled to Argentina after the war, where he lived undisturbed for many decades. According to reports, which Tudjman always denied, the Croatian president is said to have maintained personal contact with Sakic up to 1994. Only in 1999 was a trial against Sakic begun in Zagreb, and in October the 77-year-old was condemned to 20 years imprisonment.

In Bosnia, Tudjman extended his protection to the notorious HVO militia, which clung to fascist traditions even more openly than their Croatian sponsor. The HVO was financed directly from the Croatian treasury and was shielded by Tudjman against pursuit by the Hague War Crimes Tribunal. His co-operation with these notorious war criminals was so obvious that rumours began to mount that the Hague tribunal was preparing to act against Tudjman.

Tudjman possessed all the negative characteristics—and a few more—that are usually ascribed to his opponent, Yugoslav President Slobodan Milosevic. But whereas Milosevic was demonised as a “Hitler of the Balkans” and Yugoslavia was bombed to destruction, the same characteristics made Tudjman an ideal partner of the Western powers—in particular Germany and the United States.

Born in 1922, he originally was part of the leadership of the Yugoslav army. Aged 19, he followed Tito’s partisans and after the war rose to the rank of general. In 1961 he left the military to become director of a Communist Party historical institute in Zagreb. It was at this time that he became a Croatian nationalist and, as such, influenced the so-called “Croatian spring” of 1971. At that time, his denial of the true numbers of Jasenovac victims led to two short terms of imprisonment.

By then the German secret service had established close contact with the Croatian nationalists, among whom Tudjman ranked as a leading spokesman.

In 1989 he created the Croatian Democratic Union (HDZ) and the same year was elected president of the Yugoslavian Republic of Croatia. He was now a frequent and welcome guest in Bonn. The German government under Chancellor Helmut Kohl and Foreign Minister Dietrich Genscher, against the initial hesitation of the US and other European governments, pushed for the rapid recognition of Croatia after Tudjman announced its independence in 1991 following a referendum.

There was no lack of warnings that this would lead to bloody disputes all over Yugoslavia. Large national groups—like the Serbs in Croatia—suddenly found themselves in a foreign country which did not recognise their rights. In addition, it was well known that Tudjman was seeking to establish a Croatian state far larger than the Croatian Republic of Yugoslavia. Even before the unilateral declaration of independence, in several secret meetings Tudjman had agreed with Milosevic the division of Bosnia between Croatia and Serbia, whereby the largest population group—the Bosnian Muslims—would emerge empty handed.

Despite the perilous implications of Croatian secession from the Yugoslav Federation, the Western powers recognised the independence of Croatia because it served their own interests. After the dissolution of the Soviet Union and the Warsaw Pact, the US, Germany, Britain and France lost interest in upholding the unity of Yugoslavia, something they had previously—since the split between Stalin and Tito—valued as a bulwark against a Soviet thrust into the Mediterranean. With the demise of the USSR they quickly came to regard Yugoslavia’s old, centralised state structure as an obstacle to the privatisation of state-owned industry and the penetration of Western capital.

They considered Tudjman an ally in breaking open these structures and limiting Belgrade’s influence in the Balkans. Thus Milosevic became the villain and Serbia was categorised as a “rogue state”, while Tudjman, despite his authoritarian behaviour and racist opinions, was portrayed in the most favourable possible light.

In all the crucial phases of the Bosnia conflict, Tudjman was supported by Germany and the US. While the Croatian troops initially acted brutally against the Muslim population—in 1992 they massacred numerous civilians in the Mostar region—in 1994, on initiative of the US, the Croatian and Muslim nationalists formed an anti-Serbian alliance. With the military support of NATO they conquered large sections of northwest Bosnia, and hundreds of thousands of Serbs were driven out.

In 1995 the US and Germany gave the green light for the “lightning” and “storm” offensives, and provided military support against the predominantly Serbian-inhabited regions of West Slavonia and the Krajina within Croatia. Knijn, the Serbian “capital” of the Krajina, was ruthlessly bombarded and roughly a quarter million Serbs driven out or murdered.

The victims of the Bosnian war were not the only ones who suffered due to Western support for Tudjman. The Croatian population did as well. After his 10-year rule the “father of the nation”, as he liked to be called, has left behind an economic and social disaster.

Unemployment officially stands at 20 percent, wages are very low and a large part of the population lives in bitter poverty. Around the president a fabulously wealthy clique has gathered, which mainly consists of his family and some of his favourites. They have seized formerly state-owned property, in part by flagrantly illegal means. Tudjman maintained a pompous personality cult, recalling the final years of Tito.

Democratic rights in Croatia are trampled on, the press and media kept on a tight leash, and critical journalists persecuted and suppressed. Altogether, there are nine different secret services, one under the direct control of Tudjman’s son, Miroslav. These protect the security of the ruling clique. Even parliamentary President Vlatko Pavletic, who took over Tudjman’s affairs of office in the final stages of the president’s illness, publicly complained that his telephone was bugged.

In the aftermath of the Bosnian war, the great powers gradually arrived at the conclusion that Tudjman had served his purpose. The Croatian president and his right-wing extremist clique of fascists, war criminals and Mafiosi were not only hated by their own population, but their pervasive corruption and nepotism were an obstacle to the penetration of international capital. The European Union has so far refused to grant the desolate country candidate status for EU membership, which most other Eastern European states have now achieved.

Above all, Tudjman’s greater-Croatian chauvinism increasingly endangered the fragile structure of the NATO protectorate Bosnia and, in the long run, the stability of the entire Balkans. Only under massive Western pressure, and even then unwillingly, did Tudjman recognise the “inviolability of the Bosnia-Herzegovina border” in July this year. Nevertheless, he later called for the “independence” of the Croatian enclave Herzeg-Bosna.

The telegrams of condolence from Western governments contained the usual words of praise for the deceased. German Federal President Johannes Rau called Tudjman “a great figure of political leadership”. Rau went on, shamelessly, to say the friendly relations between the German and Croatian peoples which had been deepened during Tudjman’s presidency could now be developed further.

Reading between the lines, however, one can discern a certain note of relief. Now the “democratisation” of the country can go forward, is how Javier Solana, the head of the EU for foreign and security policies, expressed it. The hope is that Tudjman’s successor—under consideration is Foreign Affairs Minister Mate Granic—will be more amenable to Western requirements. At the same time there are fears that Tudjman’s party could break apart after the death of the autocrat.