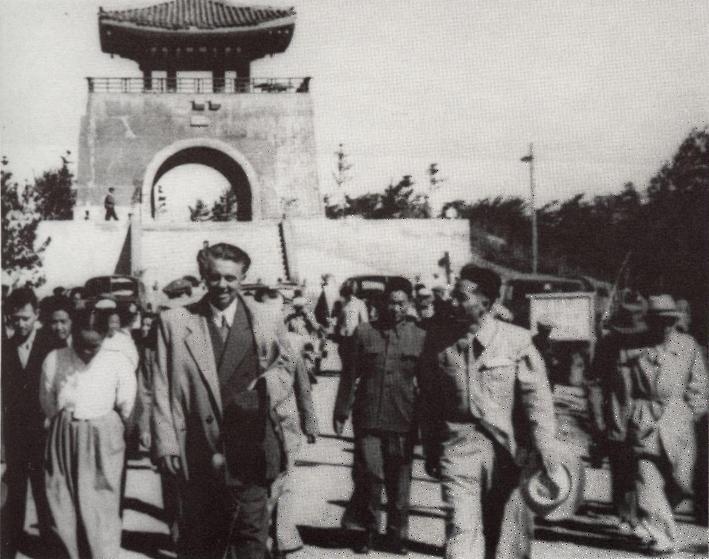 Enver Hoxha was the main architect and inspirer of the struggle which the Party of Labour of Albania waged against modern revisionism. After the open polemic with the Soviet revisionists began, he made an outstanding contribution to the defence of the Marxist-Leninist theory and the analysis of various forms of opportunism in the international communist and worker’s movement. In the 1970s, the Party of Labour of Albania, arrived at complete and accurate conclusions about the opportunist line of the leadership of the Communist Party of China.

Principled debates and confrontations over important ideological and political questions had taken place between the two parties over many years. The PLA had openly expressed to the leadership of the CP of China and Mao Zedong its reservations about and opposition to the vacillating, opportunist stands taken by the latter. Enver Hoxha’s analyses played a decisive role in determining the correct, cautious stands of the PLA towards the Chinese Party.

Among the important documents on this problem the books Imperialism and the Revolution (1979) and Reflections on China, in two volumes, with extracts from Hoxha’s Political Diary, are especially valuable. In these books he has made a comprehensive historical and dialectical analysis of the ideological concepts and the political activity of the CP of China. Under his leadership, the Party maintained its revolutionary line unaltered and made its own contribution to the Marxist-Leninist movement in the world. The following is the first part of the First Volume of Hoxha’s diaries which contain the Reflections on China.

Through these lenses we can see the uncomradely gestures the CCP, Mao Zedong, and Zhou Enlai made to the Marxist-Leninist Parties such as Kazimierz Mijal, leader of the outlawed Communist Party of Poland, which the CCP left out in the cold. We also looks at its degrading relationship with the Party of Labour of Albania, its non-socialist economy at a glimpse, the chaos of the ultra-leftist anarchist squabble of the Cultural Revolution, and its reactionary foreign policy that made concessions to Romanian and Yugoslav revisionism, as well, most dangerously to American imperialism and the butchers Richard Nixon and Henry Kissinger.

July 4th, 1962
At the meeting he had with our comrades, Chou En-lai told them that it would be difficult for China to supply us with all the things concerning which agreements had been signed.

Our comrades rejected this because it smelled of economic pressure. We must be very cautious and cool-headed, for the enemy is striving intensively to separate us from China, striving to isolate us.

December 23rd, 1962
At a dinner which the Chinese comrades put on in Peking for a group of our building specialists, Li Hsien-nien said in his speech that we would not be able to build and bring into production the new projects which we receive from China within the agreed time.

And, speaking about modern revisionism, he said (without specifying them) that there were contradictions between the Party of Labour of Albania and the Communist Party of China, although they were in agreement on the general line. His statement about the construction of the new projects is untrue, since the work has not even begun. He might have mentioned that the Chinese had not delivered the blueprints on time: this is what is delaying the project.

August 21st, 1964
The stand of the Chinese towards the centrist and revisionist outlook of the Romanians is mistaken and opportunist. In his talk with the Romanian ambassador, Chou En-lai took a wrong and nationalist stand towards the Soviet Union, telling him of China’s territorial claims against the Soviet Union and accusing it (in fact, Lenin and Stalin, for this “robbery” took place in their time) of having seized Chinese, Japanese, Polish, German., Czech, Romanian, Finnish and other territories.

These are not Marxist-Leninist,but national-chauvinist positions. Regardless of whether mistakes may or may not have been made, to raise such matters now, in the middle of the ideological struggle against Khrushchevism, assists Khrushchov.

What a line the Chinese have! On the one hand they defend Stalin on the other they call him a robber. It is clear now why the Chinese do not want us to hold the talks we had decided upon with the Romanians. It is because we are in opposition to the Chinese’ positions!

September 4th, 1964
We gave the Chinese our reply in connection with the question of invitations to the 15th anniversary of the proclamation of the People’s Republic of China. Firstly, we told them that we considered it unacceptable that the Romanian Workers’ Party and government should be invited to send a delegation to the celebrations, since until yesterday they were attacking all of us publicly, were in complete solidarity with all the modern revisionists, have the most friendly links with the renegade Tito, and are accepting credits from the Americans and other imperialists.

The Romanians base their struggle against the Khrushchev group not on Marxism-Leninism, but economic and national-chauvinist considerations. Secondly, we wrote that we considered that official representatives of Marxist-Leninist Parties are excluded.

What will communists throughout the world think when they see the Romanians given pride of place at China’s celebrations while the Marxist-Leninist parties do not figure anywhere?

No tactical considerations can justify this action, which will be an astonishing thing beyond understanding for world opinion.

September 15th, 1964
Throughout the development of the struggle of Communist Party of China against the modern revisionists, it has displayed some astonishing vacillations in its tactics.

One remembers the Moscow Meeting of 1957, when Comrade Mao publicly supported Khrushchev approving his action in denouncing Stalin and in condemning the anti-Party group of Molotov, and advocating unity with the Khrushchev group.

When I met Comrade Mao in Peking in 1956; he criticised the “incorrect” actions of Stalin, particularly his actions in relation to Yugoslavia, describing the Yugoslavs as “good Marxists.”

October 6th,1964
Certain unprincipled stands of the leadership of the CPC cannot fail to cause us anxiety. Certainly the enemies of our enemies can be our true friends when they are with us ideologically and politically. In other cases they may be our temporary allies on certain questions, although we must not give way to them on questions of principle.

But the enemies of our enemies may be our enemies, so that both have to be fought. We must take advantage of the contradictions between them, but we must not make concessions to them or be duped by their demagogy.

I am afraid the Chinese comrades are not always, very clear on these matters.

We must consider modern revisionism the main enemy in the international communist movement, or the “Major Devil” as the Chinese call it. But this major devil comprises many devils, some greater and some smaller. Sometimes these devils appear united; sometimes they split because of the contradictions between them.

In the fierce and complicated struggle against modern revisionism, Marxist-Leninists have a wide range of tactics available, But these tactics must be based on proletarian principles, not bourgeois diplomacy.

October 13th, 1964
In reply to the request of our delegation for a reply to our letter concerning China’s borders with the Soviet Union, Comrade Mao said:

“We are not going to reply to you, because if we did, ‘polemics would arise. Perhaps after many years we shall reply to you.”

This reply reflects an unprincipled, incorrect and uncomradely attitude towards the Central Committee of the Party of Labour of Albania. It shows that “Comrade Mao’ does not like comradely criticism. The fact Chinese comrades are avoiding consultations with us.

“The polemics ceased on October 16th Thus, for the Chinese the fall of Khrushchev is everything. They say in effect; “With Khrushchev gone Khrushchev is dead. We must forget the past. Nothing remains but to pack our bags quickly and dash off to Moscow, to kiss one another at the celebrations of the October Revolution.” What a comedy! What a dirty, feudal, fascist mentality!

All this is a provocation against us, for the Chinese comrades know very well that we shall not march with them along this treacherous road. So their intention is to go to Moscow and say: “The Albanians are no longer with us. We are the ‘infallible’ brain of the communist movement. Mao alone saw things correctly; all others were wrong — Khrushchev, Stalin and so on. Now one must say ‘Marx, Engels, Lenin, Mao!”

In no way will we accept the revisionist views of the Chinese. Cautiously and progressively, we must make the Party aware of this new situation. It will be impossible to prevent our disagreements, with the Chinese from spreading from the ideological and political field to our economic relations. Coercions, delays and pressures will gradually develop. We must not, therefore, go blindly into projects, or become blindly dependent on the credits they might grant us, for they might cut them off at the moment they consider most effective.

November 15th, 1964
The Chinese are telling us nothing about the results of Chou En-lai’s visit to Moscow. This is out of order, neither friendly, comradely nor Marxist.

November 21st, 1964
Chou En-lai went to and returned from Moscow like Napoleon. He suffered an ignominious defeat. The Moscow revisionists provoked him, insulted him and humiliated him. What a disgrace for the Chinese.

All their indescribable enthusiasm, their “profound judgments” — all suffered fiasco. What will they do about the PLA? Will they admit their terrible mistake? They do not deign to give us an answer.

November 24th, 1964
The Soviets have offended the Chinese badly and have not made the slightest concession. Now the Chinese are very angry and have sworn their “implacable opposition” to the Soviet revisionists.

December 27th, 1965
We informed the Chinese comrades about the formation of the Communist Party of Poland. The CC of the CPC thanked us for the information, but pointed out that it does not have secret links with the Polish Marxist-Leninists and would not help them apart from the open stand in its press against revisionism. We believe, and have always believed, that the arousing of the masses to revolution in the revisionist countries of Europe is indispensable and, urgent.

We do not interfere in the internal affairs of any state, but one of the most deadly blows we can inflict on the modern revisionists is the all round support and aid we must give all Marxist-Leninists without exception, wherever they are fighting.