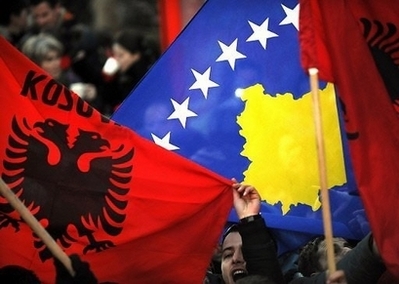 1. – Kosovo is a territory occupied since 1999 by NATO and the United States. It has one million eight hundred thousand inhabitants, mostly Albanians (of Islam). The Serb minority is 100-120000 inhabitants. With subsistence agriculture, its main economic resources are, at present, the European Union subsidies, work related withthe U.S. military base, remittances from migrants and organized crime (weapons, drugs, prostitution, theft luxury car), with organized military criminal gangs across Europe to finance the war against Serbia Kosovo Army (KLA) and the subsistence of their families.

2 .- Kosovo, with key support from the United States and Germany, has unilaterally declared an independent state, but major policy decisions regarding public spending, social programs, monetary and trade agreements will remain in the hands of government forces occupation of NATO and the United States.

4 .- The occupation of Kosovo by NATO responds to U.S. foreign policy objectives. It ensures the militarization of strategic pipeline routes and transport corridors linking Western Europe to the Black Sea. It also protects the multibillion dollar heroin trade that uses Kosovo and Albania as transit points for shipments by sea of Afghan heroin to Western Europe. Kosovo is a U.S. colony in Europe.

5 .- Kosovo hosts a major U.S. military bases, Camp Bondsteel, with more than seven thousand American soldiers. There are indications that it could replace the U.S. airbase at Aviano in Italy.

6 .- The plans to build Camp Bondsteel under a lucrative multi-billion U.S. Defense Department with a subsidiary of Texas-based Halliburton, KBR, Dick Cheney was made ​​when he was president of Halliburton. The construction of Camp Bondsteel began shortly after the 1999 invasion under the Clinton administration. Work was completed during the Bush administration, after Dick Cheney resigned from his post as chairman of Halliburton. As in the past the objectives of U.S. foreign policy overlap and are intertwined with the personal enrichment of officials of the U.S. administration.

7 .- One of the core objectives of Camp Bondsteel was to protect the pipeline project Albanian-Macedonian-Bulgarian (AMBO, for its acronym in English), which was to channel the Caspian Sea oil from the Bulgarian port of Burgas the Black Sea to the Adriatic. Very early, in 1997, two years before the invasion, a senior executive at Brown and Root Energy, a subsidiary of Halliburton, Edward L. (Ted) Ferguson had been appointed director of AMBO. The engineering company Halliburton, Kellogg Brown & Root Ltd, also took charge of the feasibility plans AMBO pipeline. The AMBO agreement for the pipeline of 917 kilometers long from Burgas to Valona, ​​Albania, was signed in 2004.

8 .- The KLA (Kosovo Army) was created as a paramilitary group in the mid nineties, supported by the United States and NATO. His goal was to destabilize and ultimately break up Yugoslavia. The KLA has close ties with Al Qaeda, which was also involved in military training. Mujahideen mercenaries from many countries have joined the ranks of the KLA, who was involved in terrorist activities both as political assassinations. Kosovo’s political system is integrated by criminal elements. Western politicians are fully aware of the nature of the Kosovar political project, of which they are the architects.

9 .- However, what we are witnessing is not a normal political relations with individual Western criminal syndicates. The relationship is much more sophisticated. Both the EU and the U.S. are using criminal organizations in Kosovo to achieve its military objectives outside. In return, Kosovo supports the interests of oil companies and defense contractors, not to mention the multibillion dollar heroin trafficking from Afghanistan.

10 .- At the institutional level, the U.S. administration, the European Union, NATO and the UN are actually promoting the criminalization of the Kosovar state, which they control. The independence of Kosovo formally transform Kosovo into an independent mafia state, controlled by a Western military alliance. What is decided in Kosovo is no right of nations to self-determination, but the right of the local mafia to build their own state.

11 .- The independence of Kosovo is closely related to the US-led war after the September 11, in Central Asia and the Middle East. The Balkans constitute the gateway to Eurasia. The invasion of 1999 established a permanent U.S. military presence in southern Europe, which serves the broader US-led war. Yugoslavia, Afghanistan and Iraq: these three war scenarios were launched on “humanitarian grounds” and in defense of “freedom of the people.” In all three countries, without exception, U.S. military bases were established.

12 .-. 70% of the heroin entering Western Europe does for Turkey. And much of shipments from Turkey by boat travel through the Balkans. Arms smuggling from Albania into Kosovo and Macedonia began in early 1992. It had developed broadly triangular traffic of oil, arms and narcotics as a result of the embargo imposed by the international community on Serbia and Montenegro and the blockade imposed by Greece to Macedonia.

13 .- Industry and agriculture in Kosovo were driven into bankruptcy as a result of the deadly “economic measures” imposed by the IMF in Belgrade in 1990. It imposed an embargo on Yugoslavia. Serbs and Albanians were taken to abysmal poverty, while endorsing the entry of Slovenia and Croatia in the European Union as a means to break up Yugoslavia. Economic collapse created an environment which fostered the progress of crime in Kosovo. The unemployment rate reached a staggering 70% (according to Western sources). Poverty and economic collapse served to exacerbate ethnic tensions latent. Thousands of unemployed youths, “just fresh out of adolescence,” an impoverished population were recruited from the ranks of the KLA.

14 .- The drug barons in Kosovo, Albania and Macedonia (which maintained relations with the Italian mafia) had become the new economic elites, often associated with the interests of Western business. In return, the financial revenues from drug trafficking and arms were recycled in other illicit activities (and vice versa), including a vast prostitution ring between Albania and Italy. Albanian criminal groups operating in Milan, “have become so powerful prostitution networks have even overtaken the Calabrians in strength and influence.” It is estimated that the Costa del Sol there are a hundred Kosovo Albanian mafia criminals, organized militarily.

15 .- The application of “strong economic measures” under the Bretton Woods institutions, based in Washington, had helped to destroy the banking system in Albania and precipitate the collapse of the Albanian economy. The ensuing chaos allowed the U.S. and EU MNCs take great positions. Several Western oil companies including Shell and British Petroleum, had laid eyes on the abundant and untapped oil deposits in Albania. Western investors were also looking stunned the vast reserves of chromium, copper, gold, nickel and platinum Albania ….

16 .- It is not surprising that there has been an “absolute silence” by the international media in relation to drug and arms trafficking in Kosovo. The fate of Kosovo had already been carefully designed prior to the signing of the Dayton accords of 1995. NATO has entered into a pernicious “marriage of convenience” with the mafia. It has been established in the region to “freedom fighters” Muslims, the narcotics trade enabled Washington and Bonn to “finance the Kosovo conflict” with the ultimate objective of destabilizing the Belgrade government and fully re-colonize the Balkans. The result is the destruction of an entire country. Western governments that participated in the NATO operation are highly responsible for the deaths of civilians, the impoverishment of populations, both Albanian and Serbian, and the difficult situation being experienced by those who were brutally uprooted from their towns and villages Kosovo as a result of the bombing.

17 .- The destruction of the Yugoslav Federal Republic and the appearance of many mobsters, economically feasible within the framework of economic globalization in the interests of the U.S. imperialists and Germany in the Balkans with the acquisition of colonized countries totally dependent. Increases, provides an economic sector and legalize clandestine mafia increasingly important in all Western economies, more or less “haunted” and tolerated in the industrialized countries, drug trafficking, weapons, prostitution. Montenegro, Kosovo, Macedonia are nonviable regions as independent states, with no other destiny than the Mafia-states become colonized by the imperial powers of the USA or EU.

18 .- The destruction of Yugoslavia was initiated with the submission of this country to the dictates of the IMF, which broke away to Slovenia and Croatia as the most suitable to join the European Union, while sinking the economy of Serbia-Montenegro and Macedonia, and caused the wars of disintegration of the various Yugoslav republics.

19 .- The independence of Kosovo is an imperialist monster replicas is similar in Macedonia with an Albanian and Serbian-Macedonian majority and in Bosnia, composed of two entities artificially federated state: the Republic of Serbia and the federation of Croats and Muslims. Macedonia and Bosnia are two viable states and colonized, settled on a powder keg that could explode at any time.

20 .- settles Kosovo is not any “right of nations to self-determination” sinola state building by the local mafia, the service of U.S. imperialism and the European Union.