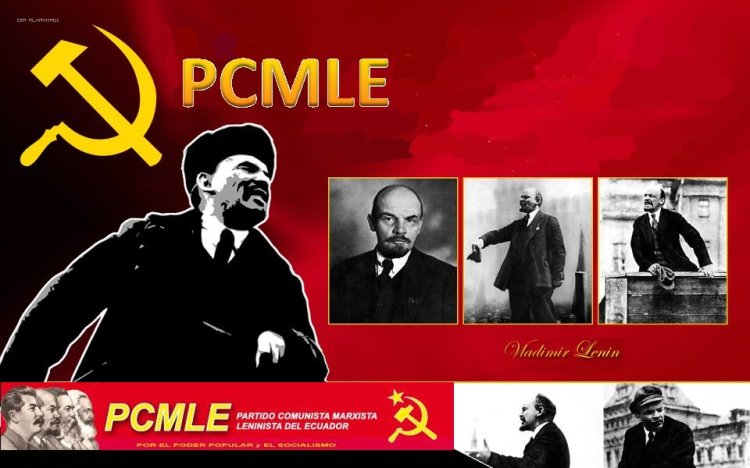 We pay tribute to our fallen comrades in the revolutionary struggle.

(Delivered by c. Oswaldo Palacios J. Spokesman Nacionalen the anniversary event held on Friday July 20 at the National Theater of the CCE.)

We start this Act communicating to our friends, workers and peoples of Ecuador, the joy and pride that pervades the minds and hearts of our members and leaders to reach this new celebration of the 48 year class party workers, whose life and actions are dedicated since the days of August 1964 to push the revolutionary change in our country, which as you can see, is the only way out and solve the social, economic and labor of our peoples.

With this momentous occasion, the Marxist Leninist extend a message of unity, cooperation and sincere decision to move to the various organizations, the Coordinator of the Left Plurinational and each of the parties and organizations that comprise it, reiterating that the years of the PCMLE, we demonstrated a vocation of unity and concrete actions, as we are willing to work now, because sectors committed to transform Ecuador march together for the benefit of advancing the process of emancipation.

Dramatic events occur in the world these days. We have experienced one of the cyclical crises of capitalism that began in 2007 and whose effects are still felt. While some of the spokesmen of the monopolies and the banks claim that the world economy “away from the precipice” for now, the disastrous effects and the consequences suffered in the various continents, regions and countries, have shaken the economic, political and social world.

During the period, have been destroyed immense volumes of productive forces, there is a drop in production and services, thousands of companies have gone bankrupt and banks, the big bump caused the collapse of the budgets of states and a large debt major economies such as the U.S., for example.

But, the main effects have suffered catastrophic working masses, youth, people, because the crisis has brought an increase in unemployment chilling, leaving hundreds of thousands in the street, jobless, unable to pay their housing, their leases and sustain life. Surprising are the indices of poverty in the world.

The present crisis shows more evidence, how capitalism – which some defend and praise – is a system of injustice, oppression and exploitation is a rotting, corroded by a series of scourges such as dehumanization, selfishness, social insecurity, crime, crime, drugs, etc..

However, the most prominent feature in the middle of the crisis, is that the workers and peoples, the poor of the world, they are unwilling to submit the capitalist system to an oppressive situation. Faced with the difficult situation they have to live with the working masses, in almost every corner of the world, even in regions that were said quiet, large social explosions have erupted strikes, struggles, demonstrations, protests, against the iniquitous measures have been taken by governments, corporations and institutions of global power, that harm them substantially.

More than a year in Spain, gripped by the effects of the crisis, suffocated by debt and the imposition of capital movement broke the “outraged” and now to met its first anniversary, over 80 cities have replicated rallies, demonstrations and protests. The university has been featured youth discontent resulted in street actions. In these same days, the miners have gone from around the country to Madrid to oppose the closure of the coal mines, leaving them on the street, unemployed. Public sector workers, including firefighters and police protesting wage cuts, the cancellation of rights and threats of dismissal contained in the “adjustments” to the right-wing government and agencies have imposed capital there.

Europe has been and is the scene of angry protests and mass struggles in Greece, Portugal, Belgium, England, Germany staged by workers, migrants, professionals, young and unemployed, who are opposed to street fighting with adjustments ordered by international agencies such as the IMF, the World Bank, the ECB, etc.. with which the bourgeois and imperialist circles are trying to be the people who pay for the crisis.

In the U.S. itself, where the so-called housing bubble burst mortgages, large clusters of migrants and workers have developed intense fighting and protests to oppose being victims of the effects of the crisis, the bank closures and industrial companies, unemployment, exclusionary laws and discrimination. There has been a massive movement “occupy” that took nerve parks and large cities, as a protest to oppose measures that affect their lives and their work.

Latin America is a continuous and irreducible series of mobilizations and struggles of diverse industries in Peru anti-mining of large monopolies, Chile, in the street fighting has thousands of middle and secondary students against education reform retrograde public. In Mexico the social struggle for land and heartfelt aspirations now joins the protest against electoral fraud, demanding fair elections, in Colombia are rising social movement actions, Puerto Rico continues its courageous action for independence against colonialist policy of Puerto Rico. In Argentina, Bolivia, Brazil, Central America and occur days combat actions by the needs, aspirations and demands of the various sectors. In Venezuela large popular sectors are in constant action in promoting their proposals for change, mobilizing to radicalize the political process of transformations that are driven from the government of Colonel Hugo Chavez Frias.

In Ecuador, the rightward shift that has taken place Rafael Correa regime aside their initial proposals and betraying democratic, patriotic and nationalistic, they have now become a government to serve new sectors of the bourgeoisie and some other traditional banking, as well as oil and mining monopolies of China and other world powers. In recent years they have signed oil contracts given the fundamentals of our hydrocarbon resources to imperialist companies, harming the national interest.

In the case of mining, has been raised to jump right to the exploitation of large-scale mining and open pit, signing a contract with China Ecsa, leaving aside all the talk about “respect for the rights of the nature “, knowing the environmental disaster that causes this type of mining on the lives of communities, water, flora, fauna, penalizing and persecuting the community leaders who have opposed it, although environmentalists , universities and other sectors have expressed open opposition.

In an initial moment, Correa declared that debt tranches that past governments had contracted, was a matter “illegal, immoral and unjust” and that was chargeable. However, negotiations resumed and Global bond payments, was negotiated with China of $ 10 billion it had given an “advance purchase” of oil, but also charged interest for that sum up the 6% interest that we pay all Ecuadorians.

The Ecuadorian banking sector – in times of global crisis – has increased, at least in the last three years, millions in profits with the full support of the current government’s policies, as outlined own official announcements of institutions.

There was a few weeks ago a real affront to national sovereignty and independence as a legislative majority in the Assembly – obeying layout rules – approved the signing of the Convention on the Law of the Sea, UNCLOS, which the country loses its jurisdiction over the 200-mile territorial sea, to leave at the expense of the interests of countries with powerful fleets to take advantage of the wealth of our ocean ichthyological.

Another aspect of the present government is regressive authoritarianism. In an arbitrary process, abuses and illegalities, Correa has been concentrated in the hands of all executive branches of government, trampling the Constitution of Montecristi approved by a referendum.

In Ecuador there today and cancellation restriction of human rights, labor, information, mobilization. Important social achievements with the struggle of the peoples are being eliminated, or imposing new rules in practice disappear. Testing the song: the right to organize, and claim workers’ strike, the university entrance and free higher education, the right to popular mobilization and participation in major national decisions.

The Correa government has unleashed the criminalization of social struggle: indigenous and peasant leaders, people who oppose mining, social leaders and leftist politicians, professionals and community leaders as those arrested March 3 in Quito, as student leaders Marcelo Rivera and Edwin Lasluisa, the Rector of the University of Cotopaxi have been prosecutions, persecutions and verbal attacks President Correa wicked accusations “terrorism”, “conspiracy” alleged “attacks on national security” are being passed reforms Penal Code and the regime is interested in making people feel fear, as a measure to allay or suffocate the popular struggle.

A propaganda machine created from the use of the media that were seized from debtors bankers, directs every moment of broadcasting in radio, TV and newspapers, the government’s achievements of the “citizens’ revolution”, exalt messianic figure of Rafael Correa and his unpublished work in favor of the “poor”. President Correa calls itself a historical figure at the height of Eloy Alfaro, of Simon Bolivar, the great “statesmen reformers” now living a “time of change” but a “change of time”.

Faced with this reality, however, stands a social movement composed of the main unions, UGTE, CEOSL, CEDOCUT, sectors and grassroots leaders CTE, CONAIE, UNE, ECUARRUNARI, FEUNASSC, CUBE, FEUE, FESE Opponents in fact harmful policies, submissive actions, the abuse and authoritarian government. That social movement to start considering Correa government supported democratic and progressive element, is now opposed, while mobilizing goes by its own demands, to defend their conquests and rights that correísmo snatches them and understood the need to oppose, expose and mobilize for protest banners and democratic, while breaks through the aspiration of building a new and different country on the basis of the organization and the united struggle of these sectors.

We salute tonight’s action Plurinational Coordinator of the left cohesive working for political and social forces of our country to face the correismo unpopular policy and propose to the people of Ecuador claims platform and democratic social and political achievements to be able to propose and galvanize action to defeat President Correa in the elections of 2013 and look for Ecuador march to a new situation that progress towards the profound changes needed majorities claiming Ecuador, given that those actions also unmask the traditional right, which is not in the government and aims to capitalize on the discontent for their own purposes.

The revolutionary party of the working class Ecuadorian, the PCMLE reaffirms its readiness to march with the workers, the youth and the people of Ecuador, along with the Ecuadorian left to effectively achieve these aspirations for change, mobilizing and fighting who want to transform the country.

To do this, leaders and foundation of our organization, we are in a process of qualification of our business with the working masses, improving our relationship ideological, political and organizational; taking steps in the communist education of our cadres and members, working in construction Communist Party, which according to our revolutionary concept is essential and effective tool for promoting leftist politics.

We reiterate our view internationalist, who just had a look these days relevant to the successful completion of the 16th. International Conference “Problems of the Revolution in Latin America,” has attended over 60 international delegates from our continent, Europe and Asia. We have discussed the presence in some scenarios current Latin American populist caudillo, generated at times of crisis in the capitalist world, which as in the case of Ecuador is present in an attempt to contain, confuse and divert the aspirations of revolutionary change peoples of Ecuador. With delegates from all these countries left by the frank discussion of ideas and commitment to advance the unity and struggle for a different world.

We pay tribute to our fallen comrades in the revolutionary struggle.

Reiterate the resolve and commitment to continue – despite attacks, threats – and the whole thrust of the government and the right, with our fight with the people, by the revolution, popular power and socialism

Long live the 48 years of PCMLE!
Long live the struggle of the working class and our peoples!
Live proletarian internationalism!
Glory to Marxism-Leninism!