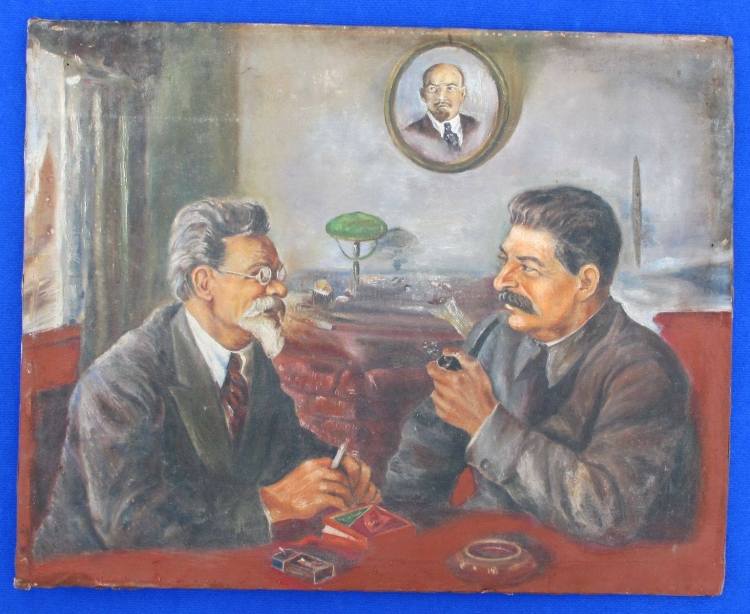 The accusation that Stalin was an anti-Semite is a strange one. Neither Stalin’s written texts nor his actions indicate anti-Semitism. Indeed, they indicate precisely the opposite, as I will show in a moment. So those who wish to make the accusation have to rely on hearsay – second- and third-hand snippets from passing conversations, whether from an estranged daughter or from those within and without the USSR who were not favourably disposed to Stalin.[1] And once such a position is ‘established’, it is then possible to read some of his actions and written comments in such a light. For instance, the ‘anti-cosmopolitan’ campaign of the late 1940s becomes a coded ‘anti-Semitic’ campaign. Or the ‘doctors plot’ of 1952-53 – in which leading doctors were suspected of seeking to assassinate government officials – is seen as an excuse for a widespread anti-Semitic purge and deportation,[2] halted only because of Stalin’s death (we may thank Khrushchev for this piece of speculation). However, the only way such an assumption can work is that many doctors in the Soviet Union were Jewish; therefore the attack on doctors was anti-Semitic. Equally, even more doctors were Russian, but for some strange reason, the plot is not described as anti-Russian.

Unfortunately for Stalin’s accusers, even the hearsay indicates that Stalin was opposed to the deep-rooted anti-Semitism of Russian culture. During the anti-cosmopolitan campaign of 1948-49 – which was actually anti-capitalist in the wake of the Second World War – it became the practice in some journal articles to include, where possible, the original family names in brackets after the Russian name. Sometimes, such original names were Jewish. When Stalin noticed this he commented:

Why Mal’tsev, and then Rovinskii between brackets? What’s the matter here? How long will this continue …? If a man chose a literary pseudonym for himself, it’s his right…. But apparently someone is glad to emphasise that this person has a double surname, to emphasise that he is a Jew…. Why create anti-Semitism?[3]

Indeed, to the Romanian leader, Gheorghiu-Dej, Stalin commented pointedly in 1947, ‘racism leads to fascism’.[4] At this point, we face an extraordinary contradiction: those who would accuse Stalin of anti-Semitism must dismiss his deep antipathy to fascism and deploy the reductio ad Hitlerum. If one assumes, even subconsciously, that Hitler and Stalin were of the same ilk, then it follows that Stalin too must be an anti-Semite. Apart from the sheer oxymoron of an anti-fascist fascist, this assertion seems very much like the speculative thought bubble that becomes ‘true’ through a thousand repetitions.[5]

I prefer to follow a rather conventional approach, instead of relying on hearsay, gossip and speculation. That approach is to pay attention to his written statements and actions. These are rather telling. Already in ‘Marxism and the National Question’ (1913), in which Stalin deals extensively with the Jews and the Bund (The General Jewish Workers’ Union of Lithuania, Poland, and Russia), he points out that dispersed minorities such as the Jews would be given the full range of protections, in terms of language, education, culture and freedom of conscience, within a socialist state. This would become his standard position, reiterated time and again and contrasted with the tsarist autocracy’s fostering of pogroms.[6] It was also reflected in extensive programs among Jews, including the fostering – not without problems and failures – of Yiddish, Jewish institutions and the significant presence of Jews at all levels of government.[7]

From time to time, Stalin had to deal with outbursts of anti-Semitism that still ran deep in Russian culture (thanks to the residual influence of tsarist autocracy). For example, in 1927 he explicitly mentions that any traces of anti-Semitism, even among workers and in the party is an ‘evil’ that ‘must be combated, comrades, with all ruthlessness’.[8] And in 1931, in response to a question from the Jewish News Agency in the United States, he describes anti-Semitism as an ‘an extreme form of racial chauvinism’ that is a convenient tool used by exploiters to divert workers from the struggle with capitalism. Communists, therefore, ‘cannot but be irreconcilable, sworn enemies of anti-semitism’. Indeed, in the U.S.S.R. ‘anti-semitism is punishable with the utmost severity of the law as a phenomenon deeply hostile to the Soviet system’. Active ‘anti-semites are liable to the death penalty’.[9]

This was no empty boast, as those who accuse Stalin of anti-semitism seem to assume. It is worth noting that article 123 of the 1936 Constitution ensured that this position was law.[10]Active anti-Semitism, even racial slurs, were severely punished. It may be surprising to some, but one of the key tasks of the NKVD (precursor to the KGB) was to counteract waves of residual anti-Semitism.[11] Yes, one of the jobs of the infamous secret police of the USSR was to root out anti-Semitism.

Further, the ‘affirmative action’ program of the Soviet Union,[12] enacted in Stalin’s capacity as Commissar for Nationality Affairs (1917-24), was explicitly a program in which territories of identifiable ethnic minorities were established, with their own languages and forms of education, the fostering of literature and cultural expression, and local forms of governance. As for dispersed minorities, even within such regions, they were provided with a stiff framework of protections, including strong penalties for any form of racial denigration and abuse. Already in 1913 Stalin had prefigured such an approach, specifying among others ‘the Jews in Poland, the Letts in Lithuania, the Russians in the Caucasus, the Poles in the Ukraine, and so on’.[13] They too – in a program of indigenization (korenizatsiia)[14] – should be able to use their own languages, operate their own schools, law-courts and soviets, and have freedom of conscience in matters relating to religion. Indeed, by the mid-1930s the Jews too were identified as a ‘nation’ with territory, having the Jewish Autonomous district in Birobidzhan.[15] This importance of this move (part of Crimea had also been proposed) is rarely recognised. It eventually failed, but it was the first move towards Jewish territory in the modern era.[16]

A final question: what about the attacks on Judaism as a religion? In 1913, Stalin wrote of the ‘petrified religious rites and fading psychological relics’[17] fostered by pockets of the ‘clerical-reactionary Jewish community’.[18] Is this anti-Semitic? No, it is anti-religious. Judaism too was subject anti-religious campaigns, which had the result not so much of divorcing Jews from their religious ‘roots’ but of producing a profound transformation in Jewish institutions and culture, so much so that one can speak of a ‘sovietisation’ of Jewish culture that produced Jews who were not religious but proud of contributions to Soviet society.[19]

What are we to make of all this? Do the hearsay and implicit assumptions speak the truth, or do Stalin’s words and actions speak the truth? I prefer the latter. But if we are to give some credence to the hearsay, then it may indicate a profoundly personal struggle for a Georgian, who was brought up with an ingrained anti-Semitism, to root it out in the name of socialism.

[14] Korenizatsiia, a term coined by the Bolsheviks, is ‘derived directly not from the stemkoren- (“root”—with the meaning “rooting”) but from its adjectival form korennoi as used in the phrase korennoi narod (indigenous people)’ Martin, “An Affirmative Action Empire: The Soviet Union as the Highest Form of Imperialism,” 74.