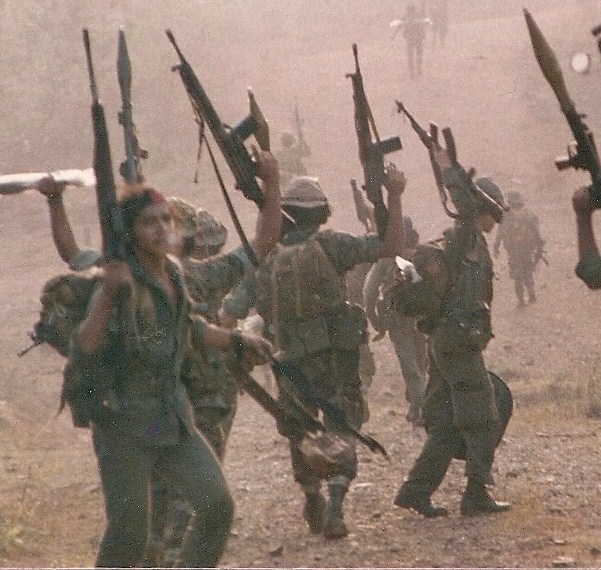 The following are excerpts from the book “The Sword and the Dollar: Imperialism, Revolution, and the Arms Race” by Michael Parenti, published by St. Martin’s Press, 1989.

The Costs of Counterrevolution

In Mozambique, for example, over a period of eight years the South African-financed rebels laid waste to croplands, reducing the nation’s cereal production enough to put almost 4 million people in danger of starvation. The rebels destroyed factories, rail and road links, and marketing posts, causing a sharp drop in Mozambique’s production and exports. They destroyed 40 percent of the rural schools and over 500 of the 1,222 rural health clinics built by the Marxist government. And they killed hundreds of unarmed men, women, and children. But they set up no “liberated” areas and introduced no program for the country; nor did they purport to have any ideology or social goals.

Likewise, the mercenary rebel force in Angola, financially supported throughout the 1980s by the apartheid regime in South Africa and looked favorably upon by the Reagan administration, devastated much of the Angolan economy, kidnapping and killing innocent civilians, displacing about 600,000 persons and causing widespread hunger and malnutrition. Assisted by White South African troops, the rebels destroyed at least half of Angola’s hospitals and clinics. White South African military forces, aided by jet fighters, engaged in direct combat on the side of the counterrevolutionaries. The rebel leader, Jonas Savimbi, offered no social program for Angola but was lavish in his praise of the apartheid rulers in Pretoria and critical of Black South African leaders.

So with the contra forces that repeatedly attacked Nicaragua from Honduras for some seven years. In all that time they were unable to secure a “liberated” zone nor any substantial support from the people. They represented a mercenary army that amounted to nothing much without US money-and nothing much with it, having failed to launch a significant military offensive for years at a time. Like other counterrevolutionary “guerrillas” they were quite good at trying to destabilize the existing system by hitting soft targets like schools and farm cooperatives and killing large numbers of civilians, including children. (While the US news media unfailingly reported that the Nicaraguans or Cubans had “Soviet-made weapons,” they said nothing about the American, British, and Israeli arms used by counterrevolutionaries to kill Angolans, Namibians, Black South Africans, Western Saharans, Nicaraguans, Guatemalans, and Salvadorans.)

Like counterrevolutionaries in other countries, the Nicaraguan contras put forth no economic innovations or social programs other than some vague slogans. As the New York Times reported, when asked about “the importance of political action in the insurgency” the contra leaders “did not seem to assign this element of revolutionary warfare a high priority.” They did not because they were not waging a “revolution” but a counterrevolution. What kind of a program can counterrevolutionaries present? If they publicize their real agenda, which is to open the country once more to the domination of foreign investors and rich owners, they would reveal their imperialist hand.

Like most of the Third World, Nicaragua during the Somoza dictatorship was one of imperialism’s ecological disasters, with its unrestricted industrial and agribusiness pollution and deforestation. Upon coming to power, the Sandinistas initiated rain forest and wildlife conservation measures and alternative energy programs. The new government also adopted methods of cutting pesticides to a minimum, prohibiting the use of the deadlier organochlorides commonly applied in other countries. Nicaragua’s environmental efforts stand in marked contrast to its neighboring states. But throughout the 1980s, the program was severely hampered by contra attacks that killed more than thirty employees of Nicaragua’s environmental and state forestry agencies, and destroyed agricultural centers and reclamation projects.

The US government is ready to accept just about anyone who emigrates from a Communist country. In contrast, the hundreds of millions of Third World refugees from capitalism, who would like to come to this country because the conditions of their lives are so hopeless, are not allowed to come in …

Must We Ignore Imperialism?

Since trade ignores national boundaries and the manufacturer insists on having the world as a market, the flag of his nation must follow him, and the doors of the nations which are closed against him must be battered down. Concessions obtained by financiers must be safeguarded by ministers of state, even if the sovereignty of unwilling nations be outraged in the process. Colonies must be obtained or planted, in order that no useful corner of the world may be overlooked or left unused.

What I want to see above all else is that this country remains a country where someone can always be rich. That’s the thing we have that must be preserved.

U.S. reasons for wanting to control the third world are to some extent circular. Thus third world resources are required in part to guarantee military production, and increased military production is required in part to maintain and expand U.S. control over third world resources …. Instrumental goals eventually come to be seen as ends in themselves. Initially the pursuit of overseas bases is justified by the need to maintain stability, defend friendly countries from communist aggression, and so on-in other words, to subjugate and control the third world; but eventually the need to establish and maintain overseas bases becomes one of the reasons for wanting to subjugate and control the third world.

I don’t see why we need to stand by and watch a country go Communist because of the irresponsibility of its own people.

The people who make US foreign policy are known to us – and they are well known to each other. Top policymakers and advisors are drawn predominantly from the major corporations and from policy groups like the Council on Foreign Relations, the Committee for Economic Development, the Trilateral Commission, the Business Roundtable, and the Business Council. Membership in these groups consists of financiers, business executives, and corporate lawyers. Some also have a sprinkling of foundation directors, news editors, university presidents, and academicians.

Reagan’s first secretary of state was Alexander Haig, former general and aide to President Nixon, president of United Technologies, director of several corporations including Rockefeller’s Chase Manhattan Bank, and member of the CFR. Reagan’s next secretary of state was George Shultz, president of Bechtel Corporation, director of Morgan Guaranty Trust, director of the CFR, and advisor of the Committee for Economic Development (CED). Reagan’s secretary of defense was Caspar Weinberger, vice president of Bechtel, director of other large corporations, and member of the Trilateral Commission. The secretary of treasury and later chief of staff was Donald Regan, chief executive officer of Merrill, Lynch, trustee of the CED, member of the CFR and of the Business Roundtable. Reagan’s CIA director, William Casey, was director of the ExportImport Bank, head of the Securities and Exchange Commission under Nixon, and partner in a prominent Wall Street law firm. At least a dozen of Reagan’s top administrators and some thirty advisors were CFR members.

Members of groups like the Council on Foreign Relations and the Trilateral Commission have served in just about every top executive position, including most cabinet and subcabinet slots, and have at times virtually monopolized the membership of the National Security Council, the nation’s highest official policymaking body.’ The reader can decide whether they compose (1) a conspiratorial elite, (2) the politically active members of a ruling class, or (3) a selection of policy experts and specialists in the service of pluralistic democracy.

These policymakers are drawn from overlapping corporate circles and policy groups that have a capacity unmatched by any other interest groups in the United States to fill top government posts with persons from their ranks. While supposedly selected to serve in government because they are experts and specialists, they really are usually amateurs and “generalists.” Being president of a giant construction firm and director of a bank did not qualify George Shultz to be Nixon’s secretary of labor nor his secretary of the treasury. Nor did Shultz bring years of expert experience in foreign affairs to his subsequent position as Reagan’s secretary of state. But he did bring a proven capacity to serve well the common interests of corporate America.

Rather than acting as special-interest lobbies for particular firms, policy groups look after the class-wide concerns of the capitalist system. This is in keeping with the function of the capitalist state itself. While not indifferent to the fate of the overseas operations of particular US firms, the state’s primary task is to protect capitalism as a system, bolstering client states and opposing revolutionary or radically reformist ones.

Far from being powerless, the pressure of democratic opinion in this country and abroad has been about the only thing that has restrained US leaders from using nuclear weapons in Vietnam, and intervening with US forces in Angola, Nicaragua, and elsewhere. How best to pursue policies that lack popular support is a constant preoccupation of White House policymakers. President Reagan’s refusal to negotiate with the Soviets in the early 1980s provoked the largest peace demonstrations in the history of the United States. Eventually he had to offer an appearance of peace by agreeing to negotiate. To give this appearance credibility, he actually had to negotiate and even reluctantly arrive at unavoidable agreement on some issues, including the 1987 INF treaty.

Evidence of the importance of mass democratic opinion is found in the remarkable fact that the United States has not invaded Nicaragua. Even though the US had a firepower and striking force many times more powerful than the ones used in the previous eleven invasions of Nicaragua, and a president (Reagan) more eager than any previous president to invade, the invasion did not happen. Not because it would have been too costly in lives but because it would have been politically too costly. President Reagan would not have balked at killing tens of thousands of Nicaraguans and losing say 5,000 Americans to smash the Red Menace in Central America. When Marines were blown away in one afternoon in Lebanon, Reagan was ready to escalate his involvement in that country. Only the pressure of democratic forces in the USA and elsewhere caused him to leave Lebanon and refrain from invading Nicaragua. He did not have the political support to do otherwise. Invasion was politically too costly because it was militarily too costly even though logistically possible. It would have caused too much of an uproar at home and throughout Latin America and would have lost him, his party, and his policies I too much support.

The policies pursued by US leaders have delivered misfortune upon countless innocents, generating wrongs more horrendous than any they allegedly combat. The people of this country and other nations are becoming increasingly aware of this. The people know that nuclear weapons bring no security to anyone and that interventions on the side of privileged autocracies and reactionary governments bring no justice. They also seem to know that they pay most of the costs of the arms race and many of the costs of imperialism. From South Korea to South Africa, from Central America to the Western Sahara, from Europe to North America, people are fighting back, some because they have no choice, others because they would choose no other course but the one that leads to peace and justice.