Who Is and Was Really Responsible for Genocide in Cambodia?

Pol Pot Was Not and Is Not A Communist

Apologists for capitalism are always inventing lies to “prove” how terrible communism is. In recent years one of their favorite tales concerns the mass killings in Cambodia by the supposedly “communist” Khmer Rouge, led by Pol Pot. Lots of articles, a couple of books and at least one major movie, “The Killing Fields,” have focused on the Khmer Rouge atrocities. Pol Pot has almost replaced Joseph Stalin as number one on the capitalists’ all-time hate list.

But there’s a big difference. Comrade Stalin was a great communist. Pol Pot, however, never was one. Some recent books, written by Western experts on Cambodia and using evidence obtained after the fall of Pol Pot, show this clearly. These books must be used with care; the authors are either pro-Vietnamese revisionists (Vickery, Chandler, Thion) or liberal imperialists (Shawcross). It’s the facts they have uncovered that are valuable, not their own opinions and analyses of these facts, which are ruined by their anti-Communist values.

“Khmer Rouge” (KR), or “Red Khmers” (Khmer is the major ethnic group of Cambodia) was the name given to the peasant rebels under the leadership of the Communist Party of Kampuchea (native name of Cambodia), or CPK. In order to see how the CPK turned into a bunch of anti-Communist murderers, a little history is essential.

History of the Cambodian Left

In 1951 the old Indochina Communist Party (ICP), dominated by Ho Chi Minh and the Vietnamese, split into Vietnamese, Laotian, and Cambodian groups. Like the world-wide communist movement as a whole by that time, these groups were rotten with nationalism and eager to compromise with “progressive” (anti-colonialist) capitalists.

In the mid-50s, the old ICPers were joined by a number of militant nationalist students returning from France, including the future KR rulers Pol Pot (real name: Saloth Sar), Ieng Sary, and Khieu Samphan. A party, the CPK, was formed by these two groups in 1960, but its existence was kept secret until 1977, long after it seized power. Apparently this was an unprincipled concession to the anti-communism of the nationalist ex-students. When anti-communism is not fought it grows, as we shall see.

Repression by the monarchist government under Prince Sihanouk soon forced the party underground. Most of the communists of the former ICP abandoned the struggle, returning to North Vietnam. Only the nationalist Pol Pot group remained.

When a peasant revolt began in 1967 in the Samlaut region near the border with Thailand, the Pol Pot group joined it. Never communists in anything but name, they assumed a line they thought they could easily win some peasants to – that the cities (home of the absentee landlords and exploitative state which taxed the peasants) and everyone in them were the enemy, including professionals, teachers and workers.

Romantic attachments to the peasantry as a class have long been characteristic of bourgeois radicals. In Russia, Lenin’s earliest polemic (1895) was directed against the Narodniki, or “Friends of the People.” The petty-bourgeois Narodniki too preached a peasant communalism in words, but practiced bloody terrorism. Vickery finds another close similarity between the KR and the ‘Antonov’ and Tambov peasant rebels in Western Russia during the Civil War, who fought communists and monarchists with equal vigor and with hair-raising atrocities. 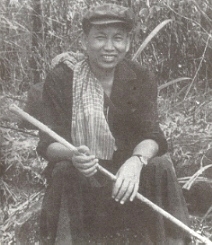 To this peasant dislike of the cities Pol Pot’s faction added a fierce hatred, amounting to racism, for anything Vietnamese. Hatred of Vietnam is a nationalist view developed by the Cambodian elite, who remembered the conflicts in past centuries between Vietnamese and Cambodian kings, and how the Vietnamese rulers had driven the Cambodians out of what is now the Mekong delta region of Vietnam.

As hatred of the U.S. and the Lon Nol government grew, peasants flooded to join the KR army. But on returning from North Vietnam to join the movement, the old ICPers found themselves under suspicion, sometimes even killed by the Pol Pot group. Thus the CPK, which took power in April, 1975, was a tense alliance of two distinct groups. The pro-Vietnamese ICPers and the Pol Pot faction had distinct areas of influence, the former being more influential in the East (near Vietnam). Their soldiers even wore different uniforms.

Although anti-Communist hacks portray the evacuation of the cities in April 1975 as an atrocity, even capitalist scholars tacitly admit it was necessary (e.g. Zasloff and Brown, in Problems of Communism, Jan.-Feb. 1979, p. 34 — a journal published by the U.S. State Department and devoted to anti-Communist propaganda with a “scholarly” slant). For example, the capital, Phnom Penh, had grown to 2 million from about 600,000 from peasants fleeing the U.S. bombings. As in South Vietnam, the U.S. had completely destroyed the peasant economy in order to wipe out the village society in which the KR flourished. Phnom Penh was provisioned only by massive imports of U.S. food, which stopped abruptly when Lon Nol fell. If the city population hadn’t been evacuated, they’d have simply starved to death!

Between 1975 and early 1977 neither group within the CPK really dominated. Anti-Communist “experts” like John Barron and Anthony Paul (authors of Murder of a Gentle Land – this pair are full-time anti-Communist propagandists for the Reader’s Digest) and François Ponchaud (Cambodia Year Zero) give the impression that massacres took place throughout the whole 1975-79 period. From surviving records and from hundreds of interviews of refugees and of those who remained in the country, Michael Vickery reveals a different pattern. Though there were occasional instances of brutality against former city-dwellers in areas held by Pol Pot supporters, mass executions didn’t begin until 1977, when the Pol Pot group consolidated its power.

A blood purge of all those suspected of being pro-Vietnamese or insufficiently “pro-peasant” began. In 1978 the remaining pro-Vietnamese forces in the CPK led a revolt, which was brutally crushed. The Pol Pot government then slaughtered anyone who had supported this group, plus the many ethnic Vietnamese in Eastern Cambodia. This led to the Vietnamese invasion of 1979. The KR had no support except its army, and the Vietnamese easily set up a puppet régime of the defeated ICP faction, which rules Kampuchea today.

How many people were killed during these mass murders? The U.S. media, following Dith Pran of The New York Times (on whom the movie “The Killing Fields” was based), claim about three million. When talking about “communists,” no figure under the million mark will satisfy capitalist writers. Vickery shows that 300,000 — still an appalling figure — is about the upper possible limit. In contrast, Zasloff and Brown write of the “heavy toll in lives” which “the enormous U.S. bombing and the intensity of the fighting” caused before 1975, and imply that the KR claims of 600,000 to “more than 1 million” dead from US bombing are credible [Problems of Communism Jan-Feb 1979, p. 40 col. 2 & note 35]. When it comes to genocide, Pol Pot & Co. were amateurs compared to the U.S. imperialists.

The Anti-Communism of the Pol Pot Régime

Whatever the number, though, these killings were not the work of “communists” of any kind, even of Soviet or Chinese-style revisionists but of anti-Communists.

Not every group which calls itself “communist” is so. For example, the Vietnamese, Soviet, Chinese and other relics of the old communist movement are capitalists in a thin disguise. They give only lip service to Marxism-Leninism, the working class, proletarian internationalism, and the need to build a classless society.

In contrast, Pol Pot, the KR, and the CPK openly rejected the idea of communism itself! A few quotations from Vickery and Chandler illustrate this:

It was not until September 27, 1977 that the existence of a “communist party” was even publicly revealed, in a Pol Pot speech (Chandler, p. 37).

From all this we can conclude the following:

The Pol Pot group also sometimes described themselves as communists between 1975 and 1977 in an attempt to get help from China. For example:

…Pol Pot’s tribute to the crucial role played by Mao Zedong’s thought in the Cambodian revolution, contained in a speech in Beijing on 29 September 1977, was not re-broadcast over Phnom Penh radio” (Chandler, in Chandler, ed., p. 45).

Mao and the Chinese Communist party had won millions of peasants to a communist, pro-working class line, whereas the Pol Pot group had tried to win the peasantry to an anti-working class, anarchist line. What China — and, equally important, the U.S. — like about Pol Pot & Co. is their genuine hostility to Vietnam, not their phony praises to Mao. 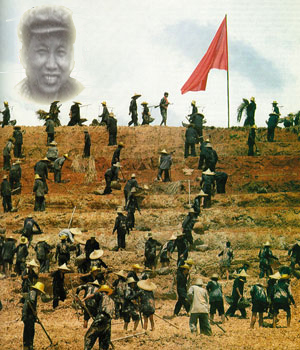 In order to weaken pro-Soviet Vietnam, the U.S. ruling class now supports a coalition of Cambodian rebel forces, of which Pol Pot’s KR are by far the strongest element. It is only a mild embarrassment to the U.S. bosses that the group they are now keeping afloat is the very one they point to as guilty of “communist” genocide! In turn, the KR call for “democratic elections” and a reformed capitalism.

For the world’s workers, the lessons of the Pol Pot experience are clear:

In December 1981, The New York Times Magazine published a story in which the author said he’d visited KR “freedom fighters” leading the war of independence against the Vietnamese occupiers. Jones, the author of the story, claimed to have seen Pol Pot directing the struggle, an heroic figure silhouetted against the sky.

The Times’ editors thought it was so good they printed it without the checking-up they usually give an article from an unknown writer. It turned out that Jones had made it all up while sitting on a beach in Spain! The Times was so eager to believe a story that made the KR and Pol Pot — whom they were already calling a genocidal mass murderer — into an anti-Communist hero that they rushed it into print! Nothing could demonstrate more clearly the willingness of the liberal ruling class to clasp to its bosom any fascist murderer who can help out in the fight against communism.